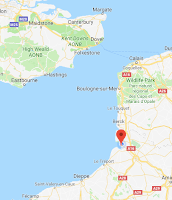 ⛅️26C Thursday 20th September 2018 ~ I'm always amazed at just how a short 35-minute train ride under the Channel and a short drive along the Northern French coast can change your birding expectations so dramatically. On route to Dazza's parent's house near Chavigny, we decided to spend a couple of days birding in the Hauts-de-France region, just an hours drive south along the coast road from Calais.

Shortly after settling into our accommodation at Le Crotoy yesterday evening and while sitting on the terrace I was astonished to see a Common Crane drift silently overhead, a species which as far as I'm aware is quite rare to this region. I know of a local bird which has been around for a while, but this one has a damaged wing and apparently can't fly, so I can only assume my one was passing through.

This morning we enjoyed breakfast in Le Crotoy overlooking the sea. The many sandbanks just offshore covered with thousands of Oystercatchers, plus many juvenile Shelduck, 37 Spoonbills and a half dozen Meditteranean Gulls.

After breakfast, we made the short journey to Le Parc du Marquenterre, a Honey Buzzard passing overhead just prior to arriving. The Parc boasts over 200 hectares of dunes, pine forests and marshes and is situated within the Somme Bay nature reserve. It offers the opportunity to visit thirteen hides, so we were really looking forward to the visit and the weather today was perfect with beautiful autumnal sunshine and a balmy 26C. 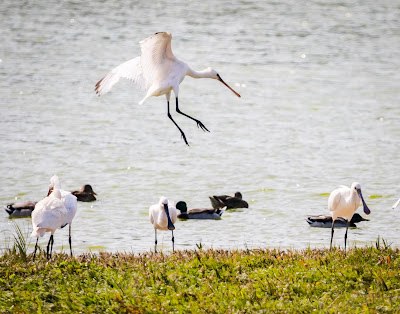 It became obvious after visiting the first few hides that this is a premier site for Spoonbills and by the time we arrived back at the nature centre some four hours later we'd observed over 200 of one of Europe's most spectacular and enigmatic wading birds.


Other waders were in good numbers too with many Black-tailed Godwits and smaller numbers of Avocet, Little-ringed Plover, Snipe, Greenshank, Common Sandpiper, Ruff, Dunlin and Redshank, plus a trio of Little Stint and a single Temminck's.

At hide number 8 a juvenile Black Tern spent lots of its time over the water feeding, occasionally perching up on a nearby post for some rest bite. Three species of Egret could also be found quite easily with Great, Little and Cattle.

Around the reserve, Cetti's Warblers would occasionally call out from the reedbeds but passerines were thin on the ground with only Linnet, Chiffchaff and Blackcap noted. Swallows and House Martins were often overhead, with Kestrel, Sparrowhawk and Peregrine and the pine forests seemed to produce Crested Tits in every other tree.


Away from the birding lots of Clouded Yellow butterflies, refusing to settle, as usual, Willow Emerald Damselfly and several tiny Tree Frogs, one of which was well found by Dazza.