With Autumn migration now beginning to kick in, I've spent the first week of September checking out many a laden hawthorn and elder, both locally and at Brandon Marsh, with the occasional walk along Farborough bank at Draycote Water. Tit flocks, mainly Long-tailed are increasing in numbers and as always the odd Goldcrest, Chiffchaff and Willow Warbler can be found within, along with the possibility of that elusive rarity.

I'm pretty well off for habitat at my marina moorings with surrounding farmland and reedbeds directly outside my windows, plus lots of hawthorns and bramble along both the west and east banks, not to mention of course that I live on the water with Napton Hill to the south-east and the Reservoir directly opposite. Thus far this month the treeline has produced Blackcap, Whitethroat, Goldcrest and Lesser Whitethroat but in the last few days, there's been no further sign of any Reed Warblers, which are a regular breeder here and now likely moved south. Linnets are on the increase on the adjacent farmland and Lapwings feed nocturnally, the odd Yellowhammer can also be found. Fourteen Yellow Wagtails in our regular Pied Wagtail roost on the 1st is a record thus far this autumn and you never know, one day I might just come across a Citrine within! Great silhouette views too of a Tawny Owl shortly after sunset as it relocated across the marina.
Yesterday (Weds 5th) a brief early walk along Farborough Bank at Draycote Water produced of note a single Wheatear, before I headed off to Coventry Airport for Whinchat. A few hours at Brandon Marsh was dire with nothing on the top and farm reedbeds of note and the pools only produced (2) Snipe, Greenshank and (4) Wigeon. Finally, a brief visit to Napton Hill to look for a reported male Redstart was thwarted by several dog walkers! 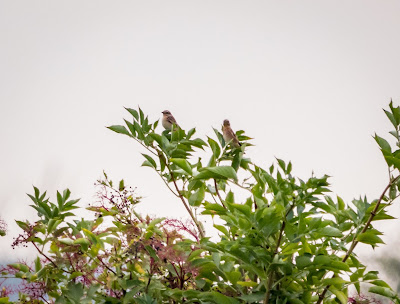 New Venture.... I've always had an interest in identifying birds by call, an important addition to any birders portfolio and have more recently become fascinated by Nocmig (the recording of nocturnal bird migration). It's basically the equivalent of visible migration watching and typically involves the recording of flight calls made by migrating birds at night. To that end, I've just invested in equipment and software to allow me to listen out from the moorings and although it's a learning curve I'm pretty excited about the prospects, so watch this space!