🍁🌞14C Monday November 5th 2018 ~ With a few chores to complete today, I decided to stay local beginning at Napton Churchyard shortly before 10am. A particularly mild morning overcast with a light breeze from the south.

On arrival a number of Redwings departed from the nearby treetops, leaving a couple of bold and quite vocal Mistle Thrush. Three Greenfinch and a small group of Chaffinch, which contained three Brambling, including a stunning male.

I sat for a while on the churchyard benches, where I'd sat on many occasions with the recently departed Richard Mays. In fact, I'd only been with him a few days before he passed away, enjoying brilliant views of a Yellow-browed Warbler at the marina. I didn't know Richard outside of the local birding community but met up on numerous occasions while out birding the locality and at Brandon Marsh. I liked Richard, he had a great sense of humour and I'm sure he'll be sorely missed by many, including me, RIP Richard.

A couple of Ravens cronking overhead before I departed for Napton Reservoir, arriving just as the sun had begun to break through the cloud. I made my way down towards the top reedbeds and while here a number of Fieldfare and Redwings, plus what seemed like a constant passage of Skylarks overhead. In fact, it was while counting a group of 11 birds overhead that I noticed a large Egret heading at height towards the south-west. A Great White Egret, which I followed before finally losing sight.

After a short while some absolutely stunning views of a pair of Bearded Reedlings, which at one stage came so close I had to step back to focus! Also of note during the visit a count of (36) Common Gulls on the water, plus (17) Lapwing and (4) Siskin over. 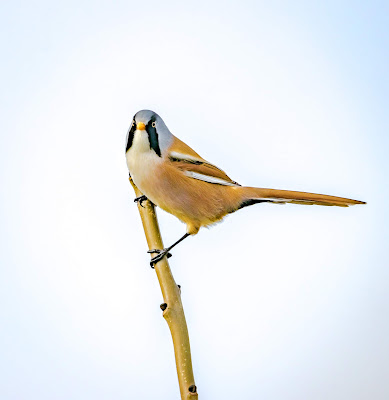 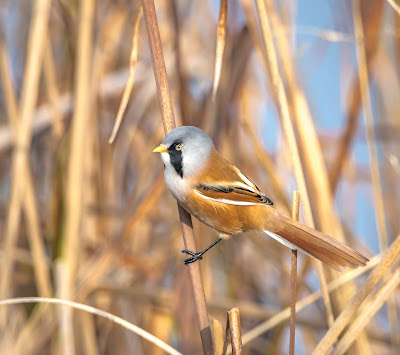