⛅️13C Tuesday 13th November 2018 ~ A two-hour drive into the southern Scottish Highlands with a few stops on the route before our final destination at Glenshee ski centre.

Having already come across several small groups of Red Grouse on various stops along the A93, which incidentally is the highest public road in the United Kingdom at 665m, we spent some time at the resort, which is a great place to get the scope out and scan the higher slopes. With patience and care Ptarmigan can be spotted, along with Moutain Hares, which much to Dazza's delight were already sporting their white winter coats.


Large herds of Red Deer were also a feature, with one constantly on the move, toing and froing across the slopes. Ravens, as you would imagine are also in good numbers with one group of fifteen birds noted.

After Glenshee, we backtracked, parking at Glen Clunie, the conifer plantation at Baddoch along the A93 and headed off for a walk into the hills to the west. Too late in the year for Ring Ouzels, which are regular nesters here but we did come across a large flock of Fieldfare, which find productive feeding grounds along the tracks. It's a good place too for finding Dippers along the river but not during our walk. 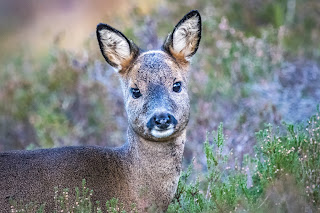 With the day ebbing away our final stop was at Ballochbuie Forest, which is best accessed from the car park at Keiloch on the Invercauld Estate. From here you walk back over the A93 and across the River Dee by way of the old General Wade bridge, entering the forest through the large gate.


However, just before entering what I would imagine being one of the estate houses had a selection of feeders outside, always worth checking. Among the six or so Coal Tits a single Red Squirrel was a good find.

Ballochbuie Forest is a breeding area for Black Grouse, just two today and is also a good place to find Scottish Crossbill. Three species breed in Aberdeenshire ~ Common, Parrot and Scottish. Common Crossbills are widespread across the area in any conifer plantation. Parrot Crossbills are found in very small numbers in the old pinewoods and plantations of Upper Deeside. Scottish Crossbills (the UK's only endemic bird species) are notoriously difficult to nail. Whereas the extremes of Common and Parrot Crossbill is more straightforward so of the four birds seen and heard today I can rule out Parrot. As for a Scottish Crossbill 'tick' there are many intermediates and so due to the short period and distance of observation, I can only register Common Crossbill for our visit.
Posted by boatbirder at 23:58