☀️23C Sunday 29th September 2019 ~ After a morning visit to the Budapest Aeropark Museum, a great place to see some of the iconic soviet designs like the Tupolev TU~154B and the Ilyushin Il-14, we took a drive out to the northern part of Kiskunsag National Park

The park consists of several scattered areas of steppe between Budapest and Szeged. Our main target was Great Bustard and the possibility of Eastern Imperial Eagle. Having researched we decided to concentrate on a specific area of the road to the south of Bugyi. Officially the area in question is outside of the national park but according to our research, this is one of the best places in Hungary to see them.

The first thing we noticed was the amount of Kestrels in the area and I don't think I'd be exaggerating if I said we saw at least 40 between Bugyi and Apaj. There are a number of hillocks that provide good panoramic views and we stopped at one in particular hill described in Dave Gosney's 'Finding Birds In Hungary' booklet.

We spent a good while scanning without luck, noting more Kestrels, Common Buzzards, several Skylarks and a passing Raven. As usual, it was Dazza, who has infinitely more patience than I who came up with the goods! Surprisingly, these huge birds can be somewhat difficult to find but she had noticed movement behind some high grass and bushes and there were no less than 27 birds, mostly asleep. Fortunately, although perhaps not for the birds a motorbike passed along a nearby dirt track shortly after her discovery scattering the pack, a great opportunity to capture some of the birds in flight.

⛅️💨25C Monday 30th September 2019 ~ Our final day of this short break was spent back at Hortobagy National Park. The weather, although quite warm and sunny to begin with turned out to be often overcast and quite breezy. Having failed to connect with Eastern Imperial Eagle yesterday, perhaps we didn't venture far enough into the park, we were quite determined to connect before heading home tomorrow.


The day started well with both Great Grey Shrike, probably a new arrival for the winter and a juvenile Red-backed Shrike, likely heading south.

We'd had the foresight to buy a weekly permit during the previous visit, only an extra £2 so we spent most of our time driving some of the back roads. We came across a few small ponds and on one, in particular, we stopped for a while to enjoy a sandwich and to watch a Black-necked Grebe that had appeared. While here the sheer volume of Cranes passing overhead and the accompanying sound was nothing short of astonishing, we also noted an amazing 16 Jays and a small group of Tree Sparrows.

Just prior to heading off a White-tailed Eagle passed overhead and while back on the main road we noted a grounded Montagu's Harrier but it was too dangerous to stop.

Finally, while checking another small pool from the car we noticed a large bird on the ploughed field behind the pool, could this be one of our Eagles? As I edged the car forward slightly for a better look the bird rose into the air, an Eastern Imperial Eagle, a first for us both! We were enthralled for several minutes before the bird eventually departed over the treetops, job done. 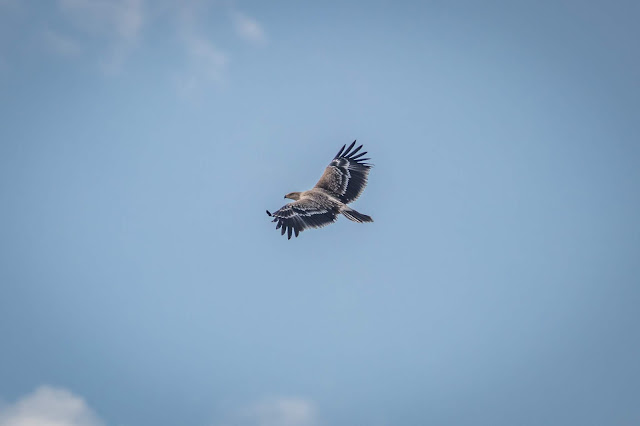 Our first visit to Hungary and a most enjoyable one. The people seem pretty friendly and many, maybe surprisingly do speak good English. We rented an apartment through Airbnb with parking and just a short 8-minute train journey from the sights and sounds of the city centre. By comparison to the UK, fuel and food are cheaper and we paid the equivalent of £1.10 per litre for diesel renting a Kia Sportage for the duration. A bottle of decent wine is less than £2.50, much to Dazza's delight!

From a birding perspective, May would be the time to visit (our original plan) as during our stay most of the summer breeding birds had moved on, we definitely plan to revisit!

More Images Of Our Short Time In Hungary...