⛅️💨18C Tuesday 8th October 2019 ~ Just a short 35-minute train journey through the Channel Tunnel and an hours drive along the French coast we arrived at Le Crotoy yesterday evening at around 7pm. We're currently on route to Dazza's parent's house, a further 5-hours drive from here. Completing the same journey last year, although a few weeks later this time around, we decided once more to break up the trip and spend a couple of nights in the Hauts-de-France region.

After breakfast today, we took the short drive to Le Parc du Marquenterre. The Parc boasts over 200 hectares of dunes, pine forests and marshes and is situated within the Somme Bay nature reserve and offers the opportunity to visit thirteen hides. On arrival, I managed to catch up with one of the guides here, Alexander, who Dazza and I had met here last year and again by coincidence at this years 'Bird Fair'. Alexander gave us a reserve update, of which the most important news was that due to extensive rains recently most of the pools were at a very high level. A shame really as during our last visit there was plenty of waders to be found in the shallows and on the scrapes, including a Temminck's Stint.

That said we managed a reasonable selection which included Spotted Redshank, Greenshank, Avocet, Black-tailed Godwit and Common Sandpiper. Other highlights of the visit were Chiffchaff, Blackcap, Firecrest, Crested Tit, Black-necked Grebe, all three Egrets and a few lingering White Storks but it was all about the Spoonbills really with over 150 birds throughout the reserve. 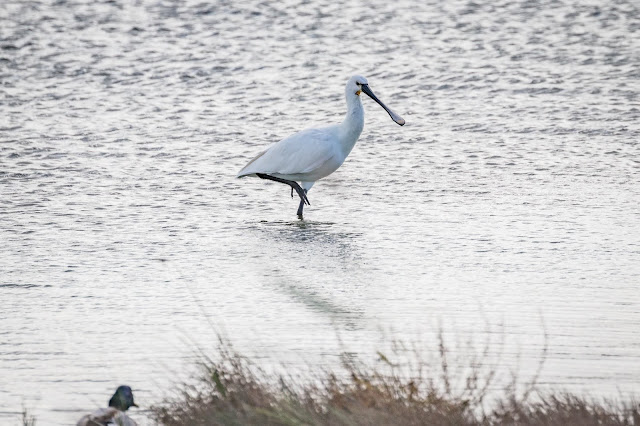 With plenty of sunshine, there were lots of Darters on the wing, all appeared to be common, along with Migrant Hawker and several Clouded Yellow butterflies.