As I mentioned briefly in part 2, I really enjoy visiting Dazza's parents. Putting aside the excellent food and wine we enjoy while here their gardens and surrounding area is a birders delight. The many fruit trees shrubs and bushes, plus a significant wood at the bottom which boasts mixed forest, including pine and beech, are alive with activity at any time of the year we visit. It goes without saying then that I spend a lot of time in the early mornings and late evenings enjoying the wildlife.

On Friday evening I took the opportunity for my first short walk around the gardens before dinner. It wasn't too long before the small population of House Sparrows were noted and so too the local Black Redstarts. The latter regularly breed here and are always a feature at any time of year.

There are a few fig trees around the garden and one, in particular, with lots of overripe fruit held three Blackcap, two Chiffchaff and a Common Redstart all busy taking advantage. However, I was at a loss to identify a huge hive near the top of a nearby tree. It was, in fact, an Asian Hornet's nest Vespa velutina an invasive species in France where it is believed to have arrived in boxes of pottery from China in 2004. Thankfully not fully established yet in the UK this is a highly effective predator of insects and would be a real danger to our Honey Bees. This nest had been dealt with by the local pest control.

Red Squirrels reside in the gardens here too and are a delight to see each day but aren't the most sociable I've ever come across, often hiding in the treetops if they know I'm about. While I was watching the squirrels a commotion in the nearby bush caught my attention and this turned out to be a Robin and I soon realised why he was upset as a Little Owl suddenly took flight along the treeline. I suspect this is a bird I've seen many times when visiting and used to roost in one of the neighbours log piles which sadly doesn't exist anymore so I'm not sure where he roosts now.

With the sun now beginning to set I decided to head back to the house but was stopped in my tracks when a Black Woodpecker suddenly began to call from the woods, a bird I've only ever seen and heard in Northern Spain! After a brief search and more calls, I did eventually find the bird feeding on the edge of the wood and actually managed a distant record shot from the garden before it flew off, but with the setting sun almost directly ahead it was almost impossible to get much definition.

The following day (Saturday 12th) we planned to have a leisurely morning before heading off to La Brenne in the afternoon (see the previous post 2/3) so I took the opportunity for an early start in the garden. Well, I say early but the sun doesn't rise until 08:15 in these parts! My main target, of course, was to seek out last nights Black Woodpecker. There were a couple of Corn Buntings along the fence opposite the front of the house which I noticed from the bedroom window and another regular bird here is the Cirl Bunting and I managed to snap one just I came out of the house.

It was another beautiful start to the day with cloudless skies and a Woodlark was singing in the distance. Skylarks had already begun to pass overhead but amazingly these were vastly outnumbered by Chaffinch. It seemed never-ending with groups of around 30 or so birds passing every few minutes and I'm certain I heard the call of Brambling within. As I entered the wood a Short-toed Treecreeper was calling and a couple of Firecrest were also busy feeding. I took a walk deeper in where I had Marsh Tit, Treecreeper (both species are here) and Nuthatch. By the time I returned to the house for breakfast, no sight nor sound of a Black Woodpecker, although Green Woodpecker and Great Spotted Woodpecker were both heard.

Later in the day I returned to the garden before dinner after our trip to La Brene and I was literally halfway down towards the woods when once again a Black Woodpecker began to call, perhaps he only visits at dusk? This time I had a good view as the bird flew directly over my head, a fantastic sight, these birds are as big as a crow and fly on a direct route with no undulating like other woodpeckers.

I had several more views once in the woods but simply couldn't get the dream shot I'd hoped for. However, a second woodpecker then appeared and at first, I dismissed it as a Great Spotted but when It eventually showed I knew this was different, could this be a Middle Spotted Woodpecker? I was pretty sure it was but this was only my third ever sighting, of course the photos would help: a shorter slender bill, red crown, although this doesn't show in the photos and a distinct lack of moustachial stripe, plus the streaking on the flanks had clinched it for me! Two firsts for France in the garden? It was unthinkable!

I spent more time in the garden during the remainder of our stay with a few list additions. There was still the odd Barn Swallow passing through, plus Common Buzzard, Marsh Harrier over the nearby fields and Pied/White Wagtails, which come in at dusk to the farm opposite.

It's been an excellent short visit with lots of highlights once again and I've also posted a few photos below of an afternoon visit to La Pinnail on Sunday, another reserve just a short drive from the house which Daaza and I enjoy. Here we also managed a site first with Penduline Tit, which we were surprised to find so late in the season. au revoir pour le moment

Full List of Bird Species Seen During Our Visit... 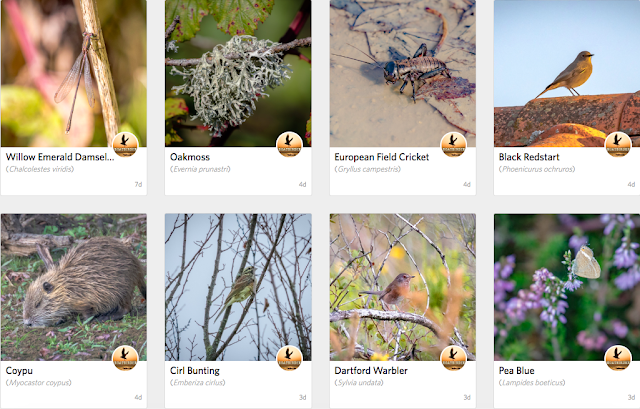 A warm welcome to Aberdeenshire Scotland. Having lived aboard our traditional narrowboat for over 16 years we're now back on ‘terra firma’ living in the heart of Aberdeenshire Scotland. Admittedly It was a sad moment when Dazza and I stepped foot off ‘Quidditch’ our cherished home afloat for the very last time and although we still own her, it brings to a close a wonderful period of our lives cruising the canals of England & Wales. We enjoyed many precious & memorable moments, but we’re very excited about our move north. I hope you continue to enjoy this journal of our field trips & travels. So let the new chapter begin.