The unpacking and picture hanging is complete and having nipped down to the village shops on a couple of occasions I'm beginning to get a better feel for the locality. What strikes me is the friendliness of the locals, everyone has a good morning and cheery smile, even the kids on their way to school offer a greeting and there seems to be a good community spirit throughout. At night you could hear a pin drop!

From a nature perspective Jackdaws and House Sparrows are commonplace, with plenty of tiled roofs and guttering plus a chimney stack on every property there's no surprise here. I'm slowly placing the odd feeder around the garden to get a feel for what's about and it's apparent already that the Jackdaws take president, although a Sparrowhawk did give them a fright the other morning when one whizzed through. A couple of early garden 'ticks' include Goldcrest and Marsh Tit, plus there's a healthy population of Coal Tits. Another feature at this time of year is the skeins of Geese which seem neverending. Mostly Pink-footed Geese but at present some large groups of Barnacle Geese. The latter apparently of the Svalbard population, which stage around the coast here before moving further south-west to their wintering grounds, particularly around WWT Caerlaverock.

There's plenty more movement overhead too with the 'cluck' of Fieldfare and 'seep' of Redwing almost constant during the mornings. I've also noticed smaller numbers of Mistle Thrush passing through. Siskins are another species heard daily along with Lesser Redpoll and the odd Crossbill. Thus far no Brambling but having seen several when we were here in March, I'm confident it won't be too long.

It was my first opportunity to get out and about further afield on Tuesday so I spent a few hours along the Ythan Estuary and then on to Collieston Harbour for a spot of sea watching. 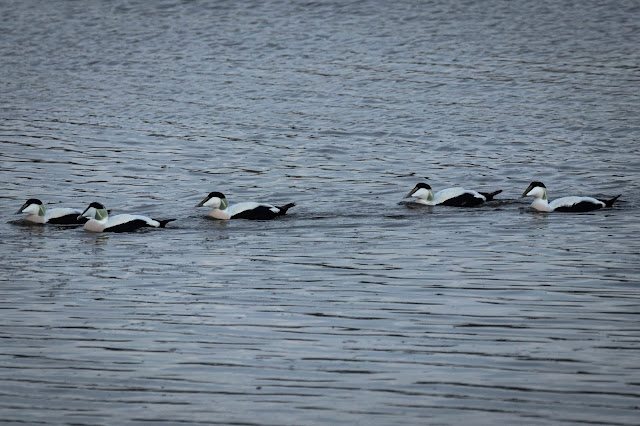 The Ythan Estuary is the tidal component of the Ythan River, emptying into the North Sea around 19 kilometres north from Aberdeen, about a 30-minute scenic drive. The main attraction for me is the huge population of Eider Ducks, in fact, it's supports the largest mainland colony of Eider Duck in the UK.
I began at Inches Point Newburgh which offers parking and a panoramic view of the estuary. Across the water, plenty of Seals had hauled out, another mainstay of the Ythan and along the shallows on the nearside banks a selection of common waders: Redshank, Dunlin, Turnstone and Oystercatcher. There were also Curlew and a few Knot, plus a single Bar-tailed Godwit. On the water Goosander, Goldeneye and Red-breasted Merganser plus of course the hoards of Eider Duck cooing and chuckling.
A half-hour at Collieston for a sea watch in choppy conditions and the highlights here on the water were Slavonian Grebe, Red-throated Diver and a group of 30+ Kittiwake which settled for the duration of my stay. A Skua Sp. headed north harassed by a few Gulls and various numbers of Gannet and Shag. Gull species: Herring, Black-headed, Common and Great Black-backed. At least four Rock Pipit noted, plus Seal and Dolphin.

A Few More Images Of The Visit...