CAIRNGORMS ~ BRAEMAR ~ GLEN SHEE & INVERCAULD
With Dazza on a week off, we'd planned a trip into the Cairngorms today and despite torrential overnight rain, which eventually subsided early morning, we decided to head off and take a chance.

Our main destination, around an hours drive, was the village of Braemar situated in the heart of the Cairngorms National Park in Royal Deeside. The village acts as the eastern gateway to the Cairngorm Mountains. They say you can encounter all four seasons in one day up here and apart from any snow, I think we did.

We made several stops along the route and had a couple of short hikes across the moorlands in between the showers. I lost count of the amount of Red-legged Partridge we flushed and Pheasants are just everywhere. On a few occasions, we dislodged small groups of Red Grouse and at one stage a single Snipe took flight but unfortunately, we didn't manage to connect with any Black Grouse today.
One of the highlights came while enjoying our packed lunch at a layby just short of arriving at Glen Shee Ski Centre, our turn around point. While following a very vocal Raven with the bins a huge bird suddenly drifted into view over the mountain tops, unmistakably a Golden Eagle. We watched the bird make several circles at height before drifting back and away over the tops, an awesome sight even at distance. While here a stunning stag Red Deer suddenly appeared from behind a small rock face and I managed a quick burst on the camera before he departed, we did see several others along the route, including good numbers of Roe Deer too. At Glen Shee, we had hoped to take a walk up the slopes in search of Ptarmigan and Mountain Hare but the weather and light had somewhat deteriorated by then so we made do with scoping the area from the car park, which paid off with Buzzard, Merlin, Kestrel and Peregrine.
Our final stop on the way home was at the Invercauld Estate car park, one of Dazzas favourite walking spots. Here there is old pine woodland, birch, wet bog and hills to explore and it can be a good place for seeing Crossbills.
However, the Crossbills seen here can belong to any one of three species that are so similar it takes real skill to tell them apart. I'm happy with Parrot Crossbill identification but such are the similarities between the Common Crossbill and the Scottish Crossbill that there is still some debate as to their true classification. As it turns out, it's a discussion for another time as we drew a complete blank on Crossbills during our visit! Coal Tit, Siskin, Bullfinch, Goldcrest and Goosander on the river all noted during the visit. 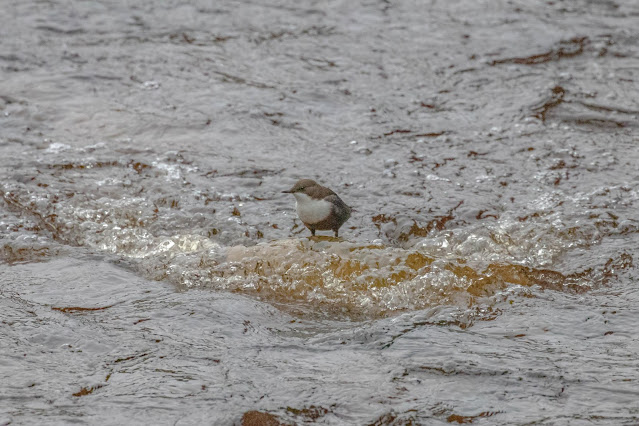 The estate also runs alongside the River Dee and here in the late gloom a Dipper performed for a short while before the light finally gave out.
Posted by boatbirder at 23:24