Having only relocated to Aberdeenshire permanently in October of last year, this is my first spring, and it could well be one of the coldest on record! I have to say that so far it's been a real learning curve with many of the species I'm so used to seeing during late March and April only just beginning to arrive here in Aberdeenshire if at all. Even most of the trees and plants have only recently decided to wake up!

A constant airflow of cold north or northeasterly winds coming down from as far north as the polar regions have held up many species migrating north thus far. However, over the past few days and after a heavy rain day on Saturday, I'm glad to report that we have actually been enjoying some warmer southerly winds, which sadly are not meant to last and I actually spotted my first Orange Tip butterfly of the year yesterday. Let's hope that this brief interlude pushes more birds north!
In fact, during my morning walks locally at Dalmadilly Ponds and Paradise Wood the dawn chorus is beginning to increase in volume. There are plenty more Swallows, Sedge Warblers, Blackcaps and Whitethroats to be found and Swifts are beginning to appear over the village.
Yesterday I made an early morning visit to Muir Of Dinnet NNR, about a 40-minute drive. With an excellent habitat of mixed pine and birch woodland, along with Loch Davan and Loch Kinord, this is one of my prime sites for picking up woodland species. Unfortunately, Wood Warbler remains a scarce visitor to Aberdeenshire and is usually only found almost exclusively around mid-Deeside. Pied Flycatcher is another species thin on the ground and often only seen at coastal locations during spring and autumn migration, so one of my exciting personal projects is finding both of these species.
Nuthatch, another species so easily found in the south, is also another rarity for the county and any sightings have to be considered by the North-East Scotland and Scottish Birds rarity committee. Add to this Willow Tit, Marsh Tit and Little Owl for example and you can understand why it's very much a learning curve. 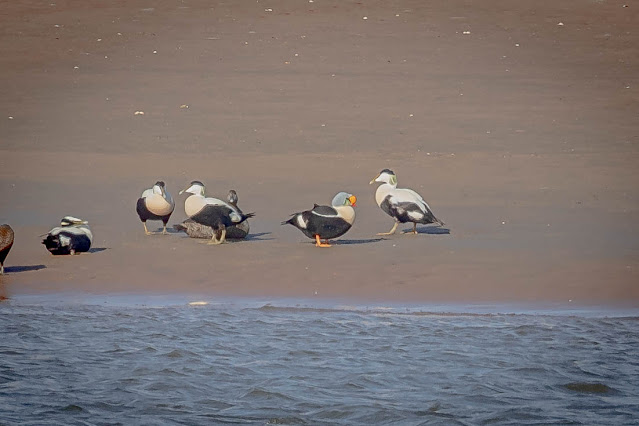 That said, one has to draw the balance and seeing species such as Osprey, Dipper, Tree Sparrow and Crossbill on an almost daily basis and being able to drive just 30-minutes for a stunning drake King Eider this evening more than balances the books.

I had quite a successful day at Dinnet yesterday too picking up Redstart, Cuckoo and Tree Pipit and indeed a few other county rarities such as Green Woodpecker and Great Crested Grebe. Also of note during my visit Common Sandpiper and Red Kite.

Also in the past week, a morning visit to RSPB Loch of Strathbeg picked four Garganey, three drakes and a female and a walk along the beach at Rattray found no less than 32 Whimbrel, by far my best ever record. Add an afternoon visit to Meikle Loch for Wood Sandpiper and my new Scottish list is building steadily.
Pictorial...

NEW Scottish Life-List Since Relocating Permanently to Aberdeenshire in October 2020
Posted by boatbirder at 22:04