The last day of meteorological spring and it's finally starting to feel something like, with temperatures actually reaching the magical 20C and beyond. However, there's still a fly in the ointment if I was to travel the short distance to the coast! Haar or sea fret is a cold sea fog. The phenomenon occurs most often on the east coast between April and September, when warm air passes over the cold North Sea and can last for days or even weeks. Aberdeenshire is renowned for it and currently along the coastline temperatures are struggling to reach double-figures.
The good news is that today Dazza and I had planned to go inland to the Cairngorms and spent an enjoyable late morning and afternoon walking part of the Invercauld Estate. Thankfully our whole visit was in the beautiful wall to wall sunshine with a temperature of 24C.
Although we've walked the area several times before, today we decided to take in the boggy valley around Felagie in the hope of some early Dragonflies and Butterflies. The walk also offers excellent views of the cliff face of Craig Leek.
The walk along the straight track down to Felagie adjacent to the woodland produced plenty of Siskin and Redpoll in the treetops, plus the odd flyby Crossbill and at one point a Whitethroat gave an opportunity for a quick snap.
Plenty of boggy pools to investigate and at one particular pool over twenty Four-spotted Chaser and an equal amount of Large Red Damselfly. Another feature was the sheer amount of Green Tiger Beetles, with one literally taking flight off the path after every ten paces or so!
Within the central part of the bog is a large pool and here a small colony of Common Gulls were nesting. Quite surreal seeing nesting gulls in the heart of the Cairngorms but since moving here we've noticed that you can't go far within the mountains without seeing one.
Butterfly numbers were a little disappointing today, perhaps a reflection of the poor spring we've encountered this year, plus a little early in the season for some of our target species like Large Heath but we did manage a small number of Pearl-bordered Fritillary. 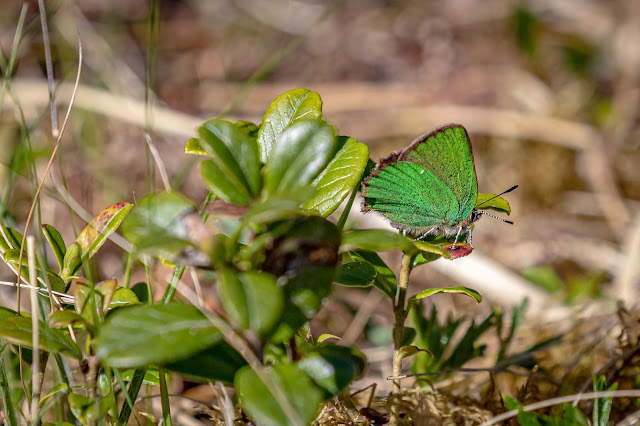 The above Green Hairstreak was one of three noted today, along with various small numbers of Orange Tip, Speckled Wood and Green-veined White. Unfortunately, the only raptors of the day were Buzzard but Redstart and Wheatear were other notables along with Curlew. Let us hope that this excellent start to the meteorological summer continues in earnest.
Posted by boatbirder at 11:31