I hadn't planned to go far today with an afternoon earmarked for lawn cutting and a spot of gardening. However, by around 1pm the temperature had risen to 22C and the breeze had dropped, (quite a rarity around here currently) so like the breeze, I dropped everything and headed off to the Muir Of Dinnet NNR for a few hours.
This is now a recognised key site for Northern Damselfly and I've actually visited a few times over the last month in search but without success. Today was no exception, having spent another hour along the boardwalk the best I could manage was a dozen Large Red Damselfly, two Common Blue Damselfly and ten Four-spotted Chaser.
I did fair much better with Small Pearl-bordered Fritillary, another one of my targets for the day. There were a few on the wing that simply wouldn't land, but I finally managed to come across at least four resting and feeding on the Bell Heather and looking pretty fresh too.
Another bonus of my visit was my first Clouded Buff Moth for Scotland, in fact, I'll have to check my records as it could actually be a lifer! Birding highlights were a couple of Cuckoo and singing Tree Pipits.
Other Images of the Day... 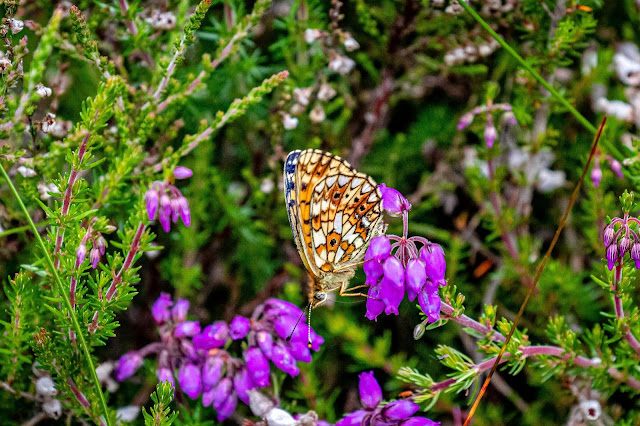