Since my last post a few weeks ago Dazza and I have been out and about both along the Aberdeenshire coastline and inland within the Cairngorms National Park. Walking in the Cairngorms is always a treat and during a hike near Ballater in beautiful conditions Curlews, Ring Ouzels and a distant Golden Eagle were just some of the highlights.
The huge colonies of sea birds along the coastal cliffs are now in full breeding mode and every time we visit a cacophony of noise suddenly hits you as you approach and then before you know it you become completely immersed in the sights and sounds.
Below the cliffs, the sea is bursting with Guillemots and Razorbills, along with smaller numbers of Puffin with Fulmars and Kittiwakes soaring overhead. Further out Gannets and Sandwich Terns dive for food and if your lucky occasionally harassed by Great Skua! Every so often a Bottlenose Dolphin will break water and both Common and Grey Seals can pop up at any time just to take it all in. This is exactly how we envisaged it during the summer months when we made the move up here and it's beyond expectations and with almost perpetual daylight at this time of year, we can enjoy nature 24/7.
Birding, in general, has been particularly quiet during this spring with just a few gems popping up away from the norm. A Golden Oriole just 15 miles from home, which even after arriving just 30 minutes after the report had already moved on. No sign of a Bluethroat at Collieston plantation, once again arriving within the hour and several reports of Rosy Starlings, all unfortunately within private gardens with little or no information on access, very frustrating! Even a Pallid Harrier seen on Aberdeenshire moorland was kept a closely guarded secret, quite rightly in this case.
So away from the birding things are finally starting to happen. The trees are looking amazing in their full canopy and lots of Wildflowers and the odd Orchid can be found on our travels, plus small numbers of Butterflies and Odonata are on the wing.
Pearl-bordered Fritillary appears to be in good numbers, with several seen during most of my walks, along with Green-veined White, Speckled Wood and even freshly emerged Orange Tips still abound. No sign of any Blues thus far and although species I'm so used to seeing each year don't venture this far north (Brimstone for one) I'm looking forward to hopefully picking up a few new species such as Scotch Argus and Mountain Ringlet. 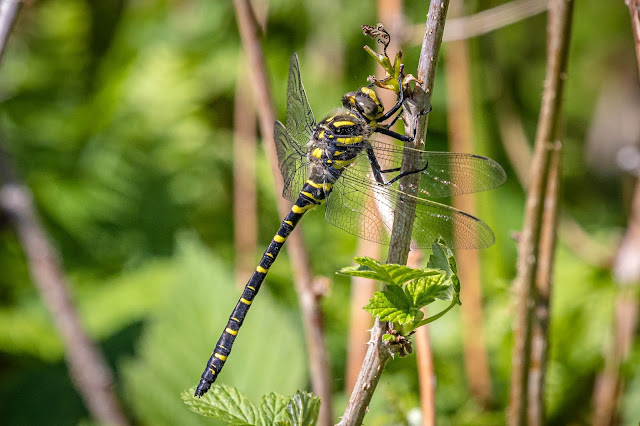 The only Dragonflies I've encountered thus far this year had been Four-spotted Chaser. However, Dazza once again came up trumps with a stunning find while out walking in Dinnet Oakwood yesterday. The above-photographed male Golden-ringed Dragonfly, the UK's longest Dragonfly and a lifer for us both.
A Few More Images...