☀️23C Thursday 5th May 2022 ~ Today is our last full day in Eastern Hungary and tomorrow we head back to Budapest in the afternoon. For our final full day here, we decided to revisit the Halasto Fish Ponds but completed the round trip back to the centre along the eastern side of the reserve, an area we've not yet visited this time around.

As we headed out of the village on route to the ponds we stopped to check on a pair of Red-backed Shrike that we'd noticed had taken up residence in an area just off-road. Almost immediately a Barred Warbler began to sing. We stayed for a while, camera at the ready and despite seeing the bird several times the blighter remained deep in cover and just wouldn't pose for a photo, reluctantly we moved on. Well, actually Dazza dragged me away!
It was probably the hottest day since arriving and the fish ponds offer little cover but despite the heat once again it was a day of many highlights. The reedbeds were a hive of activity with singing Sedge Warbler, Reed Warbler, Savi's Warbler and a few Great Reed Warbler.
The good thing about walking the east side of the reserve is that there are more trees and shrubs to explore and many singing Nightingales but it was a surprise to find a singing Icterine Warbler, another who refused to pose. We also came across a few Whinchat, always great to see anywhere in Europe.
Other reed dwellers included Bearded Tit, Penduline Tit and a spectacular singing Bluethroat. There's also a channel which runs alongside the reedbed and we inadvertently flushed a couple of Night Herons.
Our route back to the centre took us once again along the western side of the reserve, passing a group of nesting Caspian Gulls. Two Common Sandpiper flew through and overhead, Whiskered and White-winged Terns, along with Spoonbill, Purple Heron and Great Cormorant (we've only managed a single Pygmy Cormorant during this visit). Among the many Black-headed Gulls are a few Mediterranean and we did manage one of the latter later in the day.
We spent time at one of the observation towers checking the reeds and shrubland below. Here there was lots of activity and noise, Lesser Whitethroat, Nightingale and Cuckoo singing, plus spawning Carp and Terrapins splashing around, Frogs croaking (loudly!) and even a Muskrat. Yes a Muskrat, an introduced species to Europe by anthropogenic means. However, after a great effort and several photos with just reeds, I finally managed my first-ever image of a Moustached Warbler! 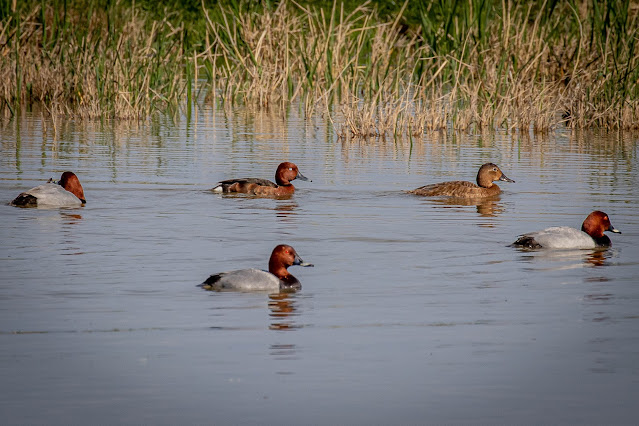 As we passed the final pond a group of Pochard had been infiltrated by a drake Ferruginous Duck and to the rear on a patch of dry scrape was a single Avocet, a surprise tick to end the day.