☀️22C Sunday 1st May 2022 ~ As a norm Dee and I don't bird on a Sunday when on holiday, it's our rest day but being just a 15-minute drive to the area we visited yesterday, Halasto Fish Ponds, we made an exception although a little later than our normal start. On route Red-backed Shrike and stunning male Whinchat along the roadside.
Today we decided to take the outward journey on the narrow-gauge railway, thus halving the 10-kilometre walk, we were still knackered from yesterday. It turns out that taking the train can be an advantage, the first of which was flushing a Nightjar from its slumber just below the railway line as we rattled along! You also get good views of the nesting Spoonbill colony, one of the largest in Europe and excellent photo opportunities of the many Whiskered Terns. Today there was also a small passage of Black, White-winged and Common Terns.
Unlike yesterday's visit, we concentrated more on the huge ponds which are renowned to hold good flocks of Red-necked and Black-necked Grebes, we didn't see either but there were good numbers of Great Crested Grebe. A single Pygmy Cormorant was noted and wildfowl included Garganey, Tufted Duck, Shoveler, Wigeon, Teal, Pochard, Gadwall and Shelduck. There are large numbers of Greylag Geese around the Hortobagy (we also noted a single Egyptian Goose within) and if they are around Lesser White-fronted Geese but we drew a blank, there are only 30 or so pairs that winter here and these have likely moved on to their breeding grounds. Cranes on the other hand stay to breed and you are constantly aware of this by their neverending calls which echo across the reserve. Waders noted today in addition to yesterday's species included Ruff, Black-tailed Godwit and Spotted Redshank.
We may have caught a brief glimpse of a Moustached Warbler today low in the reeds but were not confident enough for the tick but on the other hand, a Great Reed Warbler was unmistakable! 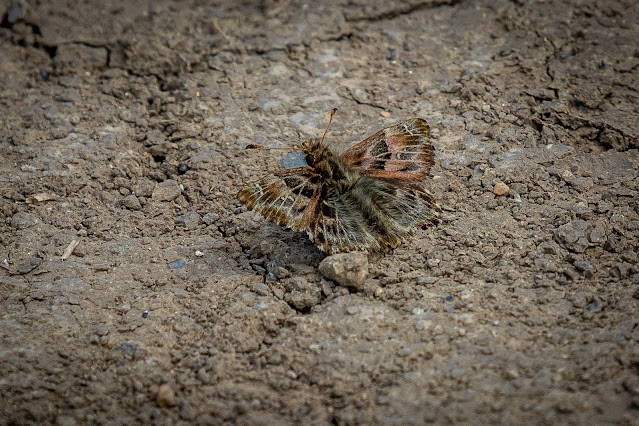 Still not too many butterflies around and just a single unidentified Dragonfly in flight despite the warmth but we did manage the above Mallow Skipper.
Back at our accommodation, the large pond in the garden is proving to be a great attraction for a few notable species and of course, provides some afternoon and evening armchair birding for Dazza and me. Hawfinch, Wryneck, Tree Sparrow, Hoopoe, Black Redstart and Tree Pipit have been the stars thus far in the pond but by far the main event has occurred on two consecutive evenings around 6:30pm when a Black Woodpecker has flown noisily directly overhead and into the woods at the rear of the property.
Garden Visitors...