🌤4C Wednesday 2nd November 2022 ~ There were 3/4 Pallid Swifts reported at Girdleness, Aberdeen yesterday evening, but unfortunately, it was too late in the day for me to make it before sunset. One of the last reports was that one had gone to roost at the base of the lighthouse lantern.

With this in mind, I decided to bite the bullet today and head off in anticipation! It was a pretty chilly start, the car thermometer only showed 4C when I arrived in the twilight around 06:15. At first light, I decided to have a wander along Greyhope Road, a few Redwings calling overhead and several noisy Oystercatchers on the golf course. It was a particularly nice sunrise, which I viewed from Torry Battery while scanning across the cityscape and over the harbour.
Finally, just after 8am a single Swift suddenly appeared flying low over the golf course and actually directly over my head but I wasn't quick enough to get the camera on it. It headed towards the lighthouse and into direct sunlight but after a while was once more over the Battery. The bird spent a good half hour entertaining us (3 other birders on site) before heading directly east out to sea and eventually out of sight. Well worth getting out of bed for! 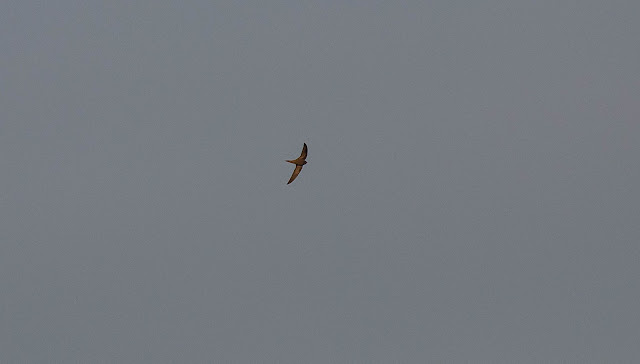 NEW Scottish Life-List Since Relocating Permanently to Aberdeenshire in October 2020
Posted by boatbirder at 12:07