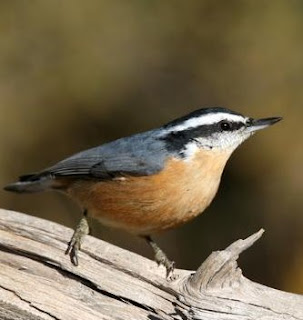 We managed to escape from our hotel at Lake Louise this afternoon, having been snowed in for most of the morning. We crossed back into British Colombia from Alberta to visit Emerald Lake, a stunning emerald green natural lake, which unlike Lake Louise is currently unfrozen.

We arrived inbetween the snow showers to a lovely sunny spell and took the 3 mile circular walk around the lake. Shortly after starting out we came upon a pair of Barrows Goldeneye quite close to the shoreline, our second pair since arriving in Canada. The shoreline is covered in Pine, Spruce and Fir trees and the Rockies rise high, up to 10,000ft all around, an inspiring location.

Continuing on, always on the lookout for Grizzly, we soon spotted an American Tree Sparrow, foraging in the undergrowth. No sooner had we noted this little chap our attention was taked by a small Raptor in pursuit of a small bird which burst from the tree ahead. We later identified the small hawk as a Sharp Shinned Hawk, another first for Canada.

Our walk took us on both the east and west side of the lake and the diversity was stunning, with snow still lying to the east and the west completely clear. Passing a small clearance a while later we came across an Osprey nest and managed to spot what I suspect was the male fishing the lake just shortly after.