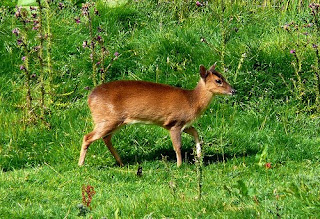 I received a text yesterday when shopping in Leamington, a Garganey had arrived on East Marsh Pool. I was tempted to travel straight over but unfortunately other commitments prevented me from doing so. Of course as you can imagine, when I arrived on site this morning he was nowhere to be found, a shame really as it would have been a first for me at the Marsh!
With all our regular summer visitors now on site my attention now turns to the more unexpected visitor, as mentioned in my last post. I toured today on my own as JR was ringing in what is known to the regular team as 'Constant Effort', an area deep within the reserve and one that I was not equipped to venture into, deciding to discard my boots for trainers in the beautiful spring weather.
I managed to pick up all the usual species, with the exception of Lesser Whitethroat, Gropper and Hobby, our Common Tern population rose to a count of 11 at one time, joined occasionally by a lone Black Headed Gull, unusual to the reserve at this time of year. Unfortunately I picked up nothing more of note. A good number of butterfly were present with Speckled Wood, Orange Tip, Peacock and Large White. Also on view were a male and female Muntjac Deer (pictured) which casually walked at separate times across Wigeon Bank.
This evening back at the marina I spend a good 90 minutes siting on the pontoon enjoying the evening sunshine and thought I'd have a good scan of what was around from the comfort of my lounger. A Cuckoo was heard from over near Napton Reservoir and our first brood of the year, 11 Mallard ducklings, past by. The sedge Warblers were singing from the reeds and our small Tree Sparrow colony is still on site. Also of note were Common Buzzard, Swallow, Reed Bunting, Willow Warbler and a single Common Tern flew over just prior to me calling it a day.
Posted by boatbirder at 19:21