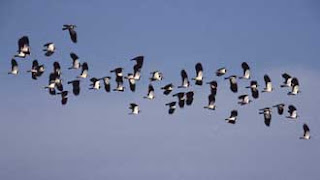 A beautiful but muggy start this morning but by the time I'd completed my tasks with the Conservation Team the heavens had finally opened.

On my usual walk through New Hare Covert I was lucky enough to get good views of Coal Tit, Willow Tit and for the first time in ages on the reserve Goldcrest, all of which were feeding in one of the golf course Pine Trees. Fewer butterflies than of late but I still managed Small White, Gatekeeper, Peacock and Speckled Wood.

The Lapwing population (pictured) at the reserve continues to increase and the current numbers are probably up to circa 800, a great sight when the flock are put up, a Sparrowhawk the culprit once again at around 7.30am.

As the River Avon is currently running high the River Pool remains the same with water breaking over the bund and into Teal Pool but to be honest very little was on show. Despite this several large Carp were basking quite close to the hide, one of which resembled a Koi Carp, extremely red in colour against the others, which were probably Common.

East Marsh Pool is still suffering from lack of waders due to the recent rain eliminating the muddy areas, apart from a lone Oystercatcher, but offered the usual waterfowl which included Shoveler, Teal, Tufted, Mallard and increasing numbers of Canada and Greylag, 2 Common Tern (1 of which is a Juvenile) were also still present this afternoon.

A visit to the Carlton Hide yeilded the best results for Waders, which this morning included Green Sandpiper and Redshank. The Juvenile Little Grebe was also showing and appears to be fending for itself. Although Sand Martins and a few Swallow are still showing well no records today of Swift, which by now are already beginning their journey south, but who came blame them in the current climate?
Posted by boatbirder at 19:39