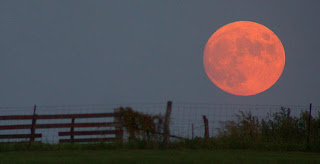 A different kind of post to end a perfect Saturday at our home Marina. The day started with an early breakfast and the usual scan out of the hatch over coffee.

The many Mallard which frequent the mooring and a lone Male Tufted duck which seems to have taken a shine to the locality were on view. The usual Yellowhammer was singing from a nearby Hawthorn and our small Tree Sparrow population were also present. Later in the morning two Common Buzzard were seem circling over the nearby copse.

In recent days a good influx of Swallow have been a delight to watch as they scoop low for a well earned drink. One of my fellow moorers has slightly over reacted in my opinion by putting his fishing keep net over his TV aerial in a bid to stop them from taking a breather, sighting a poor TV reception as the reason!!

This evening we barbecued during which time we watched the odd Common Tern making their way South, plus more Swallows in play and shortly after the sun set we encountered a rising harvest moon to the east, a large ball of light, copper in colour, suddenly appearing from some low cloud. A little while later we were treated to a low flying Bat, probably a Pipperstrelle, as it flew low over the flat calm pool.

The most amazing sight however was what appeared to be a slow moving meteor travelling east at the zenith which seemed to take an age to disappear but appeared to have a small tail as it burned up high in the atmosphere! It was just one of those evenings to remember and well worthy of a mention!!
Posted by boatbirder at 22:34