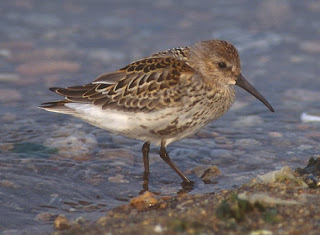 On a recent walk through the reserve a sudden sharp blast of wind sent a number of early leaves tumbling to the ground and I suddenly realised that autumn is approaching rapidly, and with it more possibilities of the odd migrant dropping in.
The number of Geese at Brandon are most certainly on the increase with large amounts of Greylag and Canada starting to appear, plus Snipe are once again a regular feature with a count of 10 on Saturday August 26th. Shoveler, at present in eclipse plumage, are also returning and becoming regular to the pools, numbering 15 during my most recent count.
A first for me at Brandon in the form of a single Dunlin (pictured), which appeared on East Marsh Pool during Saturday's visit, this brings my total bird species count at Brandon to 112 since joining the conservation team in December last year. Having said that I continue to miss out on other personal site firsts, which seem to appear on the reserve when I've literally just vacated a hide, or on the odd days I don't visit. This time a Marsh Harrier seen over Newlands reedbed on Friday and during yesterday mornings visit, Sunday 25th, a Spotted Flycatcher observed from Teal Pool Hide in one of the nearby dead trees. A couple of Lesser Whitethroat, which fortunately I do have a tick for on the reserve, were also seen by other members of the 'Sunday Club' at Carlton Hide.
Green Sandpiper and Greenshank were still on site yesterday plus we had brief cameo's from a LR Plover, which settled briefly on Willow Island and a Common Tern, plus I also still picked up the odd Chiffchaff and Willow Warbler calling, although a decent number are still around. Cetti's Warbler are also beginning to call once again throughout the reed beds.

While working on Shotton's Gully on Thursday August 20th I came across a Common Grass Snake who I unfortunately disturbed while moving one of the corrugated sheets. Also pictured above are Common Blue, currently in good numbers & Small Copper Butterfly which are also found in smaller numbers at various spots around the reserve.
Posted by boatbirder at 08:05