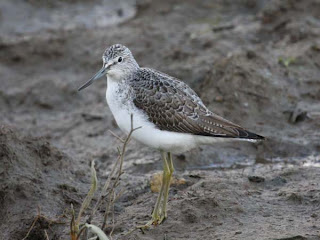 Several of my usual visits to Brandon have yielded a little more in the way of Waders recently as the recent rain water continues to drain off the pools, revealing decent feeding areas once again, but more on this shortly!

Firstly, a mention regarding an adult pond dipping session which both my wife and I attended at the nature centre last Friday evening. Not my cup of tea but I'd been persuaded by my better half to attend and have to say that I had a really enjoyable couple of hours. Among other species seen on the evening were Great Crested Newt, Great Diving Beetle, Smooth Newt, Great Water Boatman and some unwelcome Mosquito Larvae!

One bonus of attending the dipping session was the opportunity for an afternoon visit to the reserve which actually paid dividends. A reported influx of 14 Greenshank (pictured) gave way to various sitings around the reserve and I was able to pick up 3 on the Friday evening, followed by 4 in total for Sunday 16th visit. Sunday's visit was also one of those frustrating ones when only five minutes after leaving the Teal Hide a Juvenile Cuckoo was seen and photographed! Nice one George!!

On the butterfly front I've been seeing a further decline in numbers, but many Peacock and various White's still remain on site, plus excellent numbers of Common Blue and several Small Copper.

Today's visit, Tuesday 18th, was noted for 12 Black Tailed Godwit which took flight off Willow Island (East Marsh Pool) at around 8.30am, plus 2 Hobby which flew across the pool feeding on Dragonfly. Also on my list for today were lone Greenshank and Green Sandpiper, plus a Common Sandpiper briefly seen in flight over West Marsh, 6 Snipe, 3 Kestrel, Water Rail, Little Grebe and Nuthatch also added to my list of 53 species.

Finally some exciting news regarding an Otter Sighting at the reserve, which was also pictured by one of the reserve's many photographers!
Posted by boatbirder at 14:58