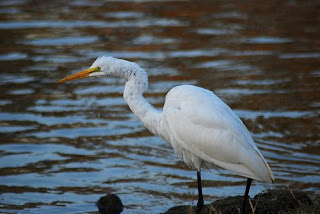 When I arrived at Brandon Marsh this morning just prior to sunrise I had a funny feeling that the first of the month would bring something special!
My walk past Sheepfield revealed Great Spotted & Green Woodpecker plus 6 Bullfinch, 2 Chiffchaff, 2 Whitethroat and 2 Blackcap, but I had no record of Willow Warbler, another regular in this area.
I spent a good half hour in New Hare Covert just as the sun was hitting the treetops and searched in vane for the Spotted Flycatcher I'd picked up on Sunday. You can imagine my reaction in the Wright Hide over coffee when JR, who was about 45 minutes behind, told me that he'd picked it up on his way through high up in the canopy. Not sure I'll live that one down.
We continued on to the Main Hide with the usual species on view, which included circa 500 Lapwing, good numbers of Shoveler, a single Little Grebe and Pochard plus several Snipe. At Carlton we hit on a lone Lesser Whitethroat and a Green Sandpiper but had to double back to the Teal Hide to pick up on 2 Greenshank which, we were reliably informed, had arrived after we'd left.
After completing some conservation chores over on West Marsh and dodging some heavy showers we headed back to the Main Hide for lunch. As we walked down the Central Marsh Path we received information on a major find for the reserve in the shape of a Great White Egret, (library Picture). The bird had been seen dropping onto Central Marsh minutes earlier and not yards from where we were walking. Doubling back to gain a high view point and after a short scan we were delighted to confirm the sighting. What followed was a frantic hour with phone messages whizzing around and within five minutes I'd personally placed the sighting on my Twitter and on the Branding Birding site. We were then treated to some great views of the Egret after being spooked by a Grey Heron as it toured the reserve before finally dropping in on River Pool. Our final views of the Egret, last recorded on the reserve in 1992 and another reserve 1st for me, were from Teal Hide as is perched precariously on a high willow overlooking the River Avon.
This remarkable days birding ended with a quick drop into Baldwin Hide to confirm views of a Dunlin that had dropped in and some excellent views of 2 Hobby as we arrived back at the car park!! What a day!!!
Posted by boatbirder at 16:02