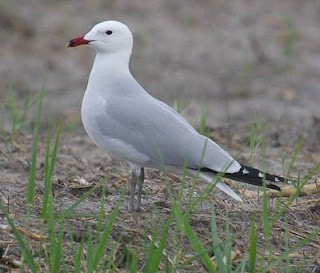 Although my visit to Spain was initially to visit family I naturally went well equipped for any birding opportunities that might arise! I was really chomping at the bit at one stage when Dee spotted an Osprey flying over the villa heading for the Salt Marshes, which are literally right behind her dad's place!

I was rewarded later in the week however with a couple of lifers when Dee and I managed 2 visits to La Mata Natural Park Lagoons just on the outskirts of Torrevieja, on Monday and Wednesday. The reserve has a surface area of 3,700 hectares. Of these, 2,100 are stretches of water, while the rest is taken up by the surrounding areas (1,400 hectares of the Torrevieja lagoon and 700 of La Mata). A conservation project for the rare Audouin's Gull (pictured left) is one of the parks priorities. I'm also delighted that we managed good views of this delightful looking gull and thus my first lifer on the visit was noted.

My second came after a visit to one of the two hides on the reserve when we managed some equally good views of a single Gull-Billed Tern which came in just shortly after our arrival. It's also worth noting that the reserve also boasts an excellent observation tower too, where good views of many Little Egret, Blacked Necked Grebe and the distant Flamingo's can be observed.

Also on our tour of the reserve we managed good views of Crested Lark, numerous in numbers and several Great Grey Shrike were also a pleasure to see. Two excellent days birding at La Mata were also capped with observations of Marsh Harrier, Hoopoe, Little Tern, Mediterranean & Yellow Legged Gull. Within our wader list we had Golden Plover, Avocet, Kentish Plover, Sanderling, Little Stint & Turnstone! For a complete list of our visit Click-here. Were back in the UK now until Sunday when were off to France to spend a week on our friends narrowboat, more birding me thinks!!
Posted by boatbirder at 06:04