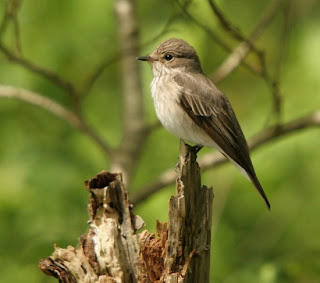 After an extremely chilly night I woke this morning just before dawn to a fogged in marina and to be honest almost turned over for an extra hours kip!
I made my way to Brandon just before sun up, playing the usual dare with the many rabbits and pigeons on route and arrived around 15 minutes before sunrise.
I took my usual walk past the wind pump, which was eerily still, and on past Sheepfield into New Hare Covert. By the time I spotted JR, who was ringing in his usual spot, Kingfisher in hand, I'd picked up a good number of Bullfinch but nothing more.
Having admired the recaptured Kingfisher, the little chap had been caught earlier in the week, I pressed on to the Wright Hide and a foggy East Marsh Pool. As I scanned through the murk I got sight of a lone Wigeon and had good numbers of Lapwing and Shoveler. Also of mention were 4 Gadwall and at this stage 8 Snipe.
After a coffee I made my way around to the Main Hide, calling in at River Pool and Teal Hide, when JR called to inform me of 2 Green Sandpiper which had just dropped in on East Marsh Pool. The sun by now had cleared most of the early morning fog and it wasn't long before I logged the 2 Sandpipers over my second coffee of the day.
A scan of the many BH Gulls revealed no surprises, that is until I looked across to Newlands and discovered to my great delight a pair of Spotted Flycatchers (Library Picture), enjoying the early morning sunshine, perched on a small piece of dead willow. By the time I'd phoned around my discovery a cameo appearance from a Sparrowhawk seemed to have sent them both into hiding. I did manage a couple more brief sightings but as TJ appeared at the hide around ten minutes later the Flycatchers were gone. However, a lone Water Rail made it's way across the front of the hide which he was lucky enough to see as he entered.
A trip to the Carlton Hide, which was full once more with the photographic community, revealed nothing new but apparently just after leaving a Grey Wagtail dropped in.
I left a beautiful sunny Brandon at around midday with a decent species count which also included 2 Whitethroat , 6 Chiffchaff, 7 Cettis Warbler and a Collared Dove, common enough but scarce on the reserve. I also managed a count of 15 Swallow and picked up a Coal Tit on Central Marsh Path
A few butterflies still around with Comma, Speckled Wood, Small Heath and Painted Lady. It's off to Spain on the morning flight so over the next week it'll be Twitter that will keep my blog updated, as I hope to get some birding in during my stay!
Posted by boatbirder at 17:16