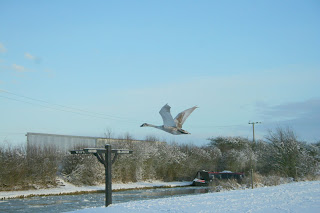 As the big freeze continues I took the opportunity to have a good look around our marina in the hope of finding something unusual to the site!

With temperatures remaining below zero during daylight hours the canal and surrounding waterway remains solid, probably around 4 inches from what I've seen. The nice thing is that a good number of long term moorer's have numerous feeding stations strategically placed around the locality, and so the local bird population appears well off. This includes our Ducks, Swans and Waders which consists of good numbers of Mallard, several Hybrid, a lone Tufted Duck, Moorhen and Mute Swan. Interestingly enough the ducks have managed to maintain an unfrozen area of the marina, and as co-incidence would have it, right next to a boat who regularly feeds them!

At Wigram's we also have a good population of Tree Sparrow and I'm happy to report that they were in good numbers today, chattering away within the Bramble and Hawthorn. Another bird which also nests here in the surrounding Phragmites Reed is the Reed Bunting, a bird which tends to become anonymous in the Winter but more recently has become numerous, obviously weather related, I counted 49 on site today. A number of Pied Wagtail were scurrying around the ice too and a Green Woodpecker has taken a liking to my feeding station.
Chaffinch, Greenfinch and Bullfinch are also regular visitors, along with the usual Blue and Great Tit, I also heard a Coal Tit calling at one stage. I noted a hunting Kestrel in an ajacent field, closely followed by a Common Buzzard, and to my delight a Raven flew East To West toward Napton Reservoir, easily recognised by the constant croaking as it flew. Dunnock, Robin and Blackbird were also present but our resident Kingfisher has probably nipped off to the local river in search of food.

Over a glass of mulled wine I spent around 30 minutes on a sky-watch and noted Lesser Redpoll, Siskin, Redwing, good numbers of Feildfare and just before dusk a good number of Gulls heading for Draycote Water for the regular nightly roost. However, the best was to come as just prior to getting back aboard into the warmth of the boat a Woodcock skimmed above the ice heading West. Amazingly my 3rd of the week as I recorded 2 of these fantastic birds at Brandon Marsh on Tuesday! More recently our Tawny Owls have become muted as it's been several nights now without hearing one, I'd also hoped for Brambling today but alas it wasn't to be!
(Pictured - A mute Swan decides to head for Warwick)
Posted by boatbirder at 18:41