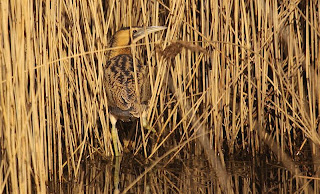 My first visit to Brandon Marsh for 2010 but only just! Having set off before daybreak on another bitterly cold morning I limped into Brandon 30 minutes later with the water gauge on red and the radiator fan almost blasting me into space. Not another Land Rover head gasket surely!!!

In need of some cheering up I cracked on towards Sheepfield, noting a Barn Owl through the darkness at one of the boxes, before settling on top of the ridge to watch the daylight breakthrough. What greeted me was another 2 Barn Owls quartering the field, and after being joined by the 'chaps', a Peregrine flew from the golf course across towards Brandon Wood. Two early rising Buzzard and a single Kestrel, plus some of Bob's dreadful jokes before moving on.

A Muntjac briefly seen through the gloom in New Hare Covert, but just the normal species on view at the Wright Hide, Main Hide and Carlton Hide, which did have an unusually good number of Reed Bunting, 6 in total. Teal Pool Hide yeilded my first Bittern sighting of 2010, a single bird which sat patiently just in front of the reeds at the back of River Pool. Having enjoyed good views of the Bittern, who departed back into the reedbed as the nearby shooting range fired up on the stroke of 10am, we took in West Marsh and Horstail Glade. The Glade had a surprise for us with a wintering Chiffchaff seen low in the bramble.

After coffee and bacon sandwiches in the Nature Centre a good tour of the rest of the reserve with Derek, which took in the 'Tip' area and Farm Pool Reedbed, before a final walk back around Newlands and New Hare Covert. A patient 20 minutes in the Covert had Great Spotted Woodpecker, Treecreeper, Siskin, Redpoll and some ground feeding Redwing, looking for windfall.
Other notables of the day were Nuthatch, Sparrowhawk, Green Woodpecker, Mistle Thrush, Fieldfare and Collared Dove, unusual to Brandon! Water Rail, Willow Tit, Coal Tit and Cetti's Warbler were also heard, so not a bad start to the year with a total of 51 species seen and 4 heard. A trip to the garage awaits tomorrow so lets hope it is a Happy New Year!!!
(Picture of a Brandon Bittern courtesy of Jeff Rankin)
Posted by boatbirder at 16:33