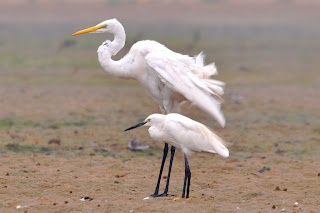 An additional work party day to complete more work on the Newlands reedbed phase 3 project took me to Brandon this morning. I don't know whether I'm just becoming immune but it felt a lot warmer by comparison to recent days, only -1C on arrival.
Three Barn Owls, which seem to have now established themselves were seen quartering Sheepfield once more, but the surprise was to come a little later. Firstly though, a visit to Wright Hide where a Little Egret was seen sitting on a fallen Willow just above the ice, a nice tick for only the 5th day of the new year.
On to Teal Pool and the Main Hide for a quick look before work commenced, a few of us then deciding to venture along to Carlton Hide to keep the blood circulating!
However, no sooner had we perched on the benches a phone call from JR, who had remained in Main Hide, sent us scurrying back at break neck speed. On arrival a Great White Egret had just flown in to join his smaller friend on the fallen Willow. What an amazing site and much to the delight and then immediate disappointment of the keen photographer's of the team, who had not brought their camera's!
Sorry but I popped the above picture in to show what you've missed guys!!!
As the snow set in and we made our way back to the Nature Centre for tea, the Little Egret was still present, but sadly his friend had departed. Also worth a mention was a large flock of mostly Lesser Redpoll, circa 100, which packed one of the Alders as we made our way back.
Posted by boatbirder at 15:29