The last few days have certainly felt like autumn, without a doubt, my favourite time of the year. The Hawthorn and Elderberries are pretty much ripe and as usual, the birds are beginning to take full advantage. Tuesday on my local patch, Napton-on-the-Hill I spent an enjoyable hour or so trawling the trees and bushes and at one stage watched a decent flock of around 14 or so Long-tailed Tits moving through. In amongst them a couple of young Goldcrest, Blue Tits, Great Tits and a number of Chiffchaff and Willow Warbler. Of course, at this time of year, there's always a chance of finding a rarity within the growing tit flocks, Barred Warbler, Icterine Warbler, Firecrest and perhaps next month even a Yellow-browed Warbler would be a real find but for me, it's all about being out there and the anticipation of what might be.

Napton is a great place to find Spotted Flycatchers and thus far they haven't disappointed with four during my visit on Tuesday. Also of note four Mistle Thrush, plus a couple of Hobby which flew through, circling briefly before continuing south. On the other hand, I still await my first Common Redstart of the autumn, another regular autumnal passage bird on the hill.

At the marina, the Pied Wagtail roost is continuing to build (circa 150) with small numbers of Yellow Wagtails joining most evenings. There are still a few Reed Warblers, a regular nesting bird here lingering around the reedbeds and over the past few evening, a couple of Tawny Owls have become quite vocal. Like at Napton the surrounding Hawthorn is starting to attract many birds, a Lesser Whitethroat over the weekend.

Despite not working with the Brandon Volunteers these days I still continue to spend many hours birding and today had a good tour of the reserve. I began with a circular walk around the top reedbed, farm and 'Tip area. Like Napton the berry bushes are busy with Blackcaps, Whitethroats and Chiffchaffs taking advantage. At one point it was almost like spring with both a Chiffchaff and Willow Warbler in full song. A single Garden Warbler was also noted and although I'm not claiming it a brief encounter with one particular bird had me thinking Wood Warbler?

At the edge of Willow Wood (for those who don't know this is the wood where the children build forts!), a Spotted Flycatcher appeared on a few occasions but became a little mobile when the education team arrived.

Down on the pools late morning and East Marsh produced (3) Greenshank, (2) Green Sandpiper and a juvenile Water Rail across on Wigeon Bank, (4) Shoveler were also noted. A trip to Ted Jury Hide had my first Cetti's Warbler for a while and Teal Pool, now with a little water and looking bang on for a Spotted Crake produced (2) Snipe. 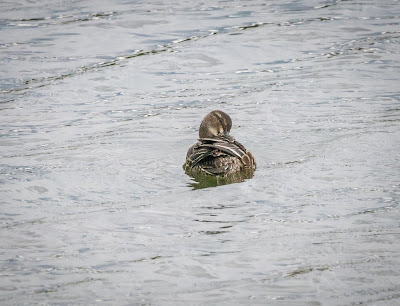 Things got even better after lunch in the East Marsh Hide when I tracked an Osprey at height as flew from right to left over Newlands, getting mobbed occasionally by several Hirundines. Shortly after an Eclipse Garganey dropped in right in front of the hide before disappearing as quickly as it arrived behind the left-hand reedbed. Quite possibly the same bird which hung around a few weeks back?
Posted by boatbirder at 19:45