The day began with heavy rain on the route from Brandon Marsh but this thankfully subsided to light rain showers and overcast laden skies on arrival at Freiston. After parking, we walked the short distance to the viewing screen at the reservoir. There's a good population of Tree Sparrows along this route and with plenty of activity around their nest boxes, it would seem they've had a good year. However, the eye was drawn immediately to the unprecedented Common Swift passage overhead, a trend which would continue throughout the day.

Once at the viewing screen we couldn't believe our luck with the two White-rumped Sandpipers showing directly in front. On top of this, we managed to count no less than (10) Wood Sandpipers, (2) Curlew Sandpipers, (2) Common Sandpipers, (5) Green Sandpipers, (2) Greenshank, plus single Snipe, Little-ringed Plover and Redshank. While here Curlew and (4) Common Terns were also noted in flight.

After spending an hour enjoying the spectacle at the reservoir we walked back to the main lagoon, pausing at the hide briefly. The lagoon was particularly quiet with just Little Grebe, (2) Common Sandpipers and (3) Common Terns of note. From here we headed on to the seawall, where we spent time under the shelter of the wooden shack which overlooks the saltmarsh.

There was plenty of activity out to sea and along the shoreline but like nearby Frampton Marsh, the water only reaches the bank during extremely hide tides. That said Geoff scoped a number of Common Scoters, which were preening along the tideline, one of which, showing its distinct white wing bars was a Velvet Scoter. Other species of note included (3) Grey Plover, Marsh Harrier and a small number of Little Egrets, Curlews, Skylarks and Meadow Pipits. As the rain began to fall we headed back to the car park.

By the time we reached a very quiet RSPB Frampton Marsh, there was plenty of brightness around but unfortunately, the wind had increased considerably. Nevertheless, we took a circular tour taking in the seawall and all three hides but the conditions were challenging. Once again huge numbers of Common Swifts, along with many Sand Martins but much fewer Swallows and I didn't personally manage a single House Martin!  Further additions to the day-list during our stay included (5) Spoonbill, Black-necked Grebe, Ruff and Yellow Wagtail. Despite recent sightings of Long-billed Dowitcher, we were not surprised to 'dip' on this particular species in the conditions. 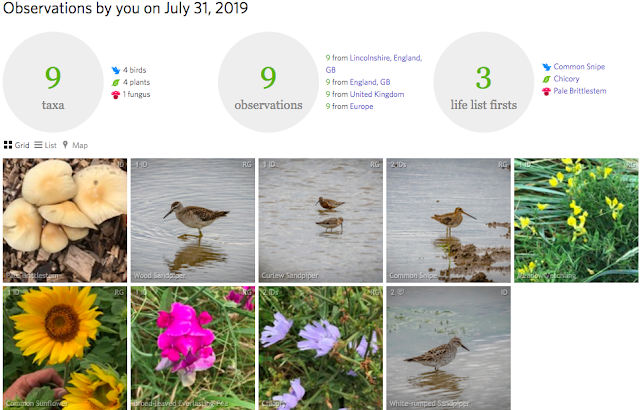