☁️🌧⛅️18/21C Thursday 11th May ~ Monday 15th May 2019 ~A long weekend out on the canal and despite the weather being mostly cloudy the odd sunny period brought out the Butterflies & Dragonflies.

On Friday I took a circular walk around the Oxford Canal towpath which takes me from our mooring at bridge 100 near Flecknoe up to bridge 98 and then across country past Wolfhampcote Farm. From here the track meanders until you reach Hillcrest Farm, before taking the gravel road back to the canal rejoining at bridge 101.

The surprise came at a gated section of the road just beyond Wolfhampcote Farm when I noticed a female Beautiful Demoiselle! Having managed to follow it for a while she posed long enough for a few photos. This is only my second ever sighting of this species for Warwickshire.

Lots of pristine Gatekeepers are now starting to appear and Meadow Browns and Ringlets were by far the most abundant. Other species were made up of (11) Marbled White, (3) Large White, (2) Small White, (1) Green-veined White, (3) Small Skipper, (4) Small Tortoiseshell, (2) Red Admiral and (3) Comma.

Surprisingly not many Banded Demoiselle or indeed Common or Azure Blue Damselflies along the canal but both Brown Hawker and Southern Hawker were noted.

Other highlights included a Tawny Owl perched in a tree directly in front of the boat on Saturday night around midnight. I did try to sneak out for a closer look, only managing a silhouetted view as the bird departed across the adjacent wheat field.


A gentle cruise back to the marina this morning produced a Red Kite, which I often see along this stretch and most likely nesting nearby. I also noticed a Common Sandpiper and managed to slow sufficiently for a photo before it eventually flew further back along the canal.

Other Images of the Weekend... 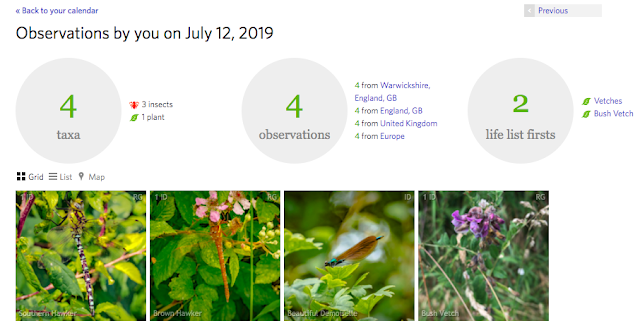