Lots to celebrate this weekend with the easing of the 'Stay at Home' order, my birthday and of course Easter Weekend, although Monday is not a bank holiday up here in Scotland.

Picnic packed, bins, camera and scope at the ready Dazza and I spent the day in the Cairngorms on Good Friday, Aberdeenshire side of course! We began at the Invercauld Estate car park, where a number of tracks lead to areas of old pine woodland, birch, wet bog and hillside.
This is a good area for Crossbills, with all three species (including the endemic Scottish Crossbill) found within the locality. We saw several today but all were Common Crossbill. I have little experience of the Scottish Crossbill thus far, which is only usually accepted if accompanied by a sound recording, a project for the future maybe.
Along the cliff face at Craig Leek, a couple of Peregrines were displaying, joined for a short while by a third, plus a passing Red Kite, two Ravens and a Common Buzzard. It was an enjoyable walk with a good selection of woodland birds, Jay, Mistle Thrush, Coal Tit, Siskin, Chaffinch and a few Brambling but the best was a couple of Black Grouse which surprised us when they flew out of a nearby low tree!
Looking down the valley towards the bog distant views of Curlew and Snipe in flight, plus a good number of Common Gulls, which appear to be quite widespread within the Cairngorms currently. A Green Woodpecker, a species that has remained elusive since moving here in October and not particularly common in Aberdeenshire was calling constantly but sadly we failed to connect. However, there was no such problem if you were looking for Oystercatchers, which seem to be literally everywhere at the moment, including many in the fields around our home.
After a long walk and our picnic, we headed on towards Glen Shee making several stops along the A92 (Scotlands highest Road at 2,199Ft) before reaching our turnaround point at the ski centre. We paused at the centre for a while, a good place to scan for Golden Eagle, Ptarmigan and Mountain Hares but dipped on all three, the latter a bit of a surprise! Red Grouse are pretty widespread around these parts and we saw several along the route. Dee spotted a Wheatear from the car window at one point but when I turned about for my year-tick unfortunately we couldn't relocate, so that tick will be a little while longer for me.
A shorter walk along Clunie Water on route home produced Dipper, more Crossbill, Red Grouse and displaying Meadow Pipits, always a delight at this time of year with their wonderful parachute display. Common Sandpipers nest along this particular stretch of water and Ring Ouzel can be found around the rocky outcrops but it's still a little early in the calendar for these. Three Sand Martins shot through at one point, a handy year-tick for Dazza.
The best though was a cracking find by Dazza when she came across a pair of shed Red Deer antlers, these will look quite good on the wall having found them naturally! 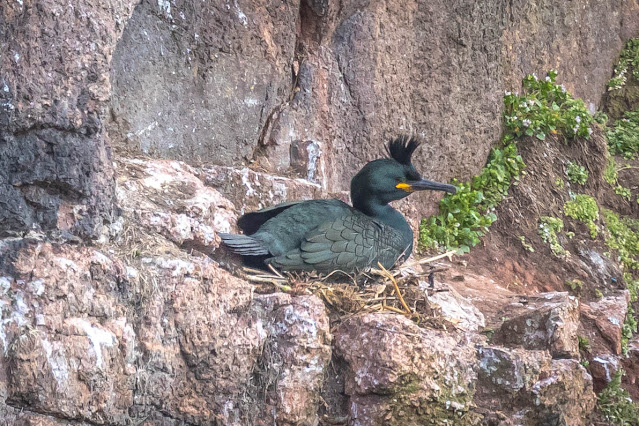 Saturday we were less energetic and decided on a short drive to 'Bullers of Buchan, a small hamlet with spectacular sea cliffs. This area is also one of the best sites north of Aberdeen to see Puffins but despite a report of a good number in the sea a day earlier, we failed to see any. They certainly weren't in any of their burrows.

All the other colony birds were getting down to business though with Guillemot, Razorbill, Shag, Fulmar and Kittiwake all noted.
Posted by boatbirder at 11:24