Another frosty, cloudless and beautiful start for my pre-dawn trip to Glen Muick, just an hours drive from home.

This is a highland glen on the Balmoral Estate with varied habitats; agricultural land, birch and conifer woods, moorland, river and of course Loch Muick. From Ballater, the drive to the main car park at Spittal of Glen Muick is around eight miles. The road itself contains many passing places and lots of opportunities to stop and check out the various habitats.
At one of my first stops just after the road passes onto open moorland the sound of Oystercatchers could be heard reverberating in the still morning air. As I stood watching the birds on the River Muick below I was amazed when three Black Grouse suddenly flew in, one perching nicely on a nearby rock for a good fifteen minutes.
My next stop offered scoped views of a distant Black Grouse leck with at least six birds doing battle in a covered area alongside the river. While here a number of Curlews were displaying and then a winnowing Snipe, a wonderful sight and sound and all this alongside the constantly parachuting Meadow Pipits, which were plentiful. By the time I reached the car park an hour later (many stops on the route), I'd recorded (3) Wheatear, a small number of Red Grouse, more Black Grouse, Ring Ouzel, (2) Stonechat and a Dipper on one the burns below.
Once at the car park, there is a circular walk around the loch (12.5 km), which, at the head of the loch, passes Glas-allt-Shiel, a fascinating building built as a retreat for Queen Victoria, which she referred to as her 'Widows House', where she could escape from the world following the death of her husband Albert.

Back to the birding and I was curious to note after my research that Common Gulls nest on the moorlands around here and there were in fact several birds feeding on and around the loch during my walk. Best on the water was a summer plumage Red-throated Diver but frustratingly my camera simply refused to focus on the bird. I can only assume that due to the flat calm water and the reflections of the surrounding mountains it somehow confused the autofocus and my images simply don't do the bird justice.

An iconic species from the Scottish Glens is of course the Red Deer. I viewed several small herds today, which seemed quite settled in their environment and permitted some close observation and photo opportunities. While doing this I also noted some large and noisy high-level skeins of Pink-footed Geese heading north, perfect weather for migration I should think. Mid-April up here in Aberdeenshire is still a little early in the birding calendar, a fact I'm still getting used to and so a few expected absentees from the visit today which included Tree Pipit and Common Sandpiper, the latter another species that breeds here along the river. There's always a good chance of  Golden Eagle up here too but sadly not today, oddly, the only raptor during my whole visit was a single Buzzard. 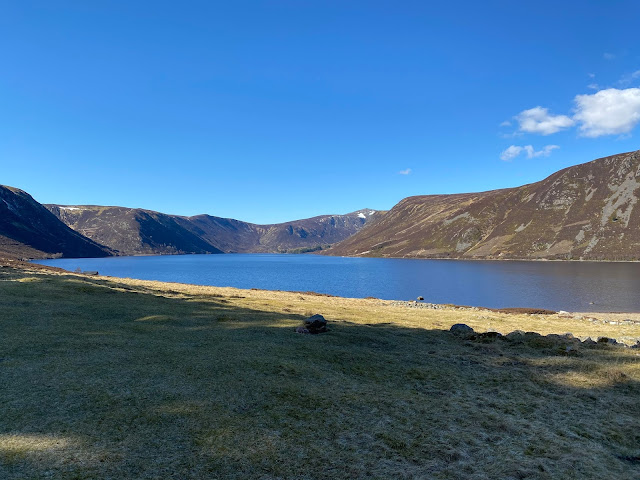 I found Glen Muick to be an incredibly inspiring place and somewhere I intend to visit more often. I found myself just sitting on a number of occasions simply soaking in this stunningly beautiful scenery and atmosphere and for me sums up one of the main reasons for our move to Scotland.