🇪🇸 Wednesday 23rd November 2022 🌤 21C ~ Wind NW @ 8MPH ~My first look at Cantera Los Arenales since the massive wildfire in July and a visit full of trepidation. Thankfully the parking area and surrounding quarry were still intact but after setting off up towards Puerto de la Graja it became quite clear that the whole area had been devastated! 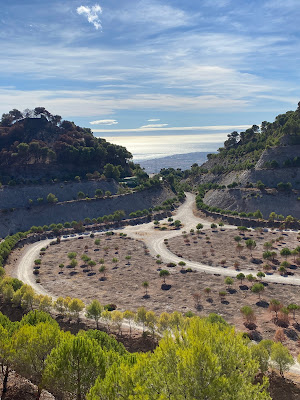 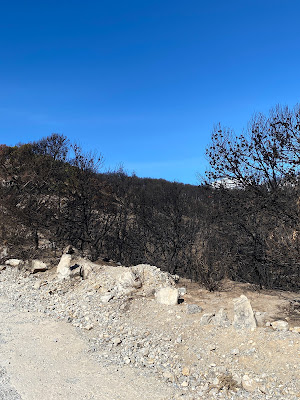 The fire ended up scorching 1,870 hectares in the municipalities of Mijas, Alhaurin el Grande and Alhaurín de la Torre with over 3,000 people evacuated. At the point of writing it's still unclear as to whether the fire was started deliberately or not!

Despite the devastation, I decided to walk the entirety of what is normally my turnaround point at Puerto de la Graja, just short of 3,000ft. By this stage Crested Tit, Firecrest and Short-toed Treecreeper would be a regular sighting but the silence was deafening, although occasionally I would hear a Crossbill as it transited overhead.
While at the very top, a lone Chaffinch passed just below me followed by a sudden woosh of air which gave up a Peregrine in hot pursuit. Thankfully for the Chaffinch, the Peregrine passed by some moments later unrewarded.

Despite the devastation, there are signs of recovery with Palms and Flax-leaved Daphne starting to emerge.

On one now well-established plant a Lang's Short-tail Blue butterfly perches and on a scorched and burnt piece of wood, a Common Darter takes a breather, nature is such a robust and wonderful thing.

Having returned to the car I spent some time around the carpark searching the vegetation and rock face and ended on a positive note with a few of the species that reside here Black Wheatear, Dartford Warbler and Sardinian Warbler.
The view from Puerto de la Graja