🇪🇸 Monday 21st November 2022 🌤 21C ~ Wind NW @ 6MPH ~ My first visit to Guadalhorce this trip ended up with a creditable 58 species in just over 4 hours. Site details can be found HERE or by clicking on the SPAIN🇪🇸 link at the top of the blog.

After parking at the church, I always spend time checking out the treeline and reedbeds on the left of the roadside as I make my way down to the reserve. There was plenty of water and plenty of activity today with at least a half dozen Chiffchaff, (3) Blackcaps and (2) Black Redstarts. Midway down is an enclosed section of wasteground on the opposite side, always worth a look and here a Hoopoe was busy foraging.
A few Crag Martins as I crossed the Guadalhorce bridge before entering the reserve and also along the banks a Grey Heron, Little Egret and a Kingfisher.  As I made my way to my first stop at the Laguna de la Casilla an Osprey drifted silently overhead.

The Laguna de la Casilla was particularly quiet with the only species of note being (4) Little Grebe but just as I was leaving I managed to get a glimpse of a Booted Eagle which flew along the del Rio Viejo.  Before I reached the screen which overlooks the old river I could hear the Black-winged Stilts (Guadalhorce has a large population) and there were (8) feeding below, along with a single Ringed Plover but the quiet theme continued.

Things improved as I walked down to the de Aves Marinas with Greenshank, Dunlin, Sanderling and more Black-winged Stilts on the old river but I was caught out by a Stone Curlew and just managed to get a record shot as the bird flew past towards the Laguna Grande.
I spent a short time at the Marinas looking out to sea with Gannet, Yellow-legged Gulls, Great-black-blacked Gulls and (2) Sandwich Terns before a walk along the beach to my final stop at the Laguna Grande.
The water levels had reduced considerably since my last visit in April and there was plenty of activity here. The open water was covered in Shelduck, somewhere in the region of 250 and an even larger number of Cormorants were perched all around the laguna.
Also on the water Wigeon, Shoveler, Teal and (6) Black-necked Grebe, which can be found here all year round. Waders included (2) Little Egret, Sanderling, Dunlin, Redshank, Black-winged Stilt, (2) Grey Plover, (7) Avocet and a single but distant Spotted Redshank. (9) Greater Flamingo and (2) Spoonbill were also noted but asleep for the whole time during my stay.
On the walk around to my final stop of the day the Laguna Escondida, a nice find was the above Crimson Speckled moth, which I've recorded several times over the years in southern Spain. The laguna held a large number of Shoveler and is the best place on the reserve to find White-headed Ducks but sadly I didn't manage a single one during my stop, the first time I've failed in over 10 years of visiting!

A FULL LIST of the site visit can be found HERE 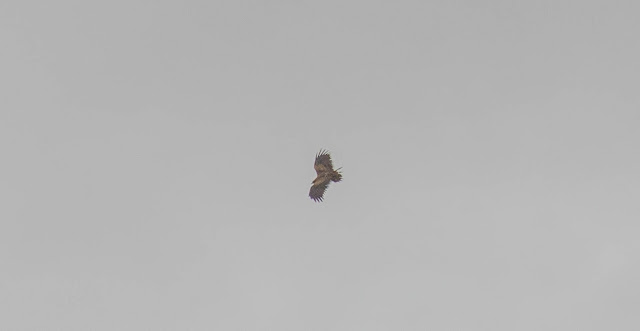 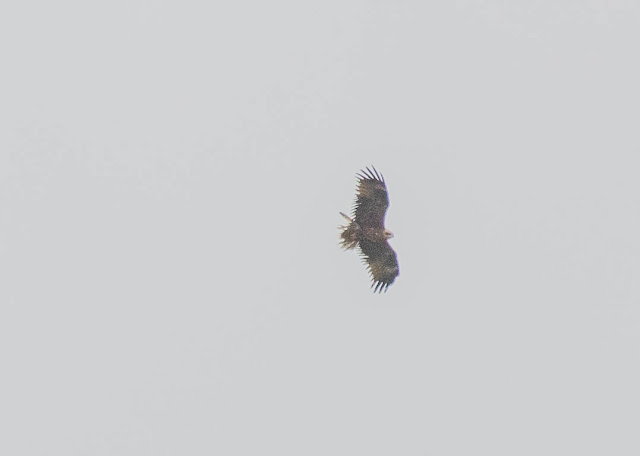 Finally on the way back to the car I spotted a large Vulture-type bird which came in from the north circling the reserve high overhead. As the poor photographs above show this was a particular scruffy bird, which looked like it had gone through the mill. A difficult call as the photos show little detail due to the position of the sun and overcast conditions but having discussed it with friends and passed it to some local Andalusian birders the general consensus is a probable 2nd year Griffon Vulture but I still remain unconvinced!
Posted by boatbirder at 21:19