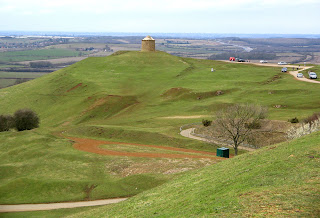 Leading on from my previous post in relation to ending up trumps when you least expect it, well once again I struck gold this afternoon!

I’m based for a few days at a holiday cottage in Mollington, about 6 miles from Banbury celebrating my mothers 90th birthday. Not expecting to get too much birding in over the next few days I still always go tooled up, just in case. After taking mum for lunch in Leamington Spa I decided to take the back roads back to the cottage and happened to drive straight through Burton Dassett Country Park (Library Picture).

The park, situated in southeastern Warwickshire covers around 100 acres and is situated on a spur of rugged ironstone hills that rise to 203 meters above sea level. From here the park projects out into a relatively flat plain and as a result the hills provide magnificent views in all directions, and of course like Napton Hill should be a superb stop off for migrating birds.

After dropping mum back at the cottage for a well earned snooze I took the 10 minute drive back and managed 90-minutes walking this wonderful new find. Immediately after parking up a couple of Grey Wagtails flew across the open plain and down into a shallow gorge which housed a good selection of berries, Elder and Hawthorn mainly. I sat at the top scanning below and after a relatively short time caught site of a red flash which dropped to the ground before flying back low into a Hawthorn, my first Common Redstart this Autumn!

A signpost pointed in the direction of Fox Covert, a ¼ mile copse of mainly Pine as it turned out where I had Treecreeepr, Goldcrest, Long Tailed Tit and Chaffinch. Emerging from the Covert I took a high hill skirting a good selection of Hawthorn bushes and finding a good observation point, watched a spotted Flycatcher in the lovely warm sunshine doing his stuff for a good 20 minutes.

After returning to the car I decided to take a short drive further around the park avoiding the many grazing sheep and stumbled on the amazing sight of at least 30+ Yellow Wagtail, in all phases of plumage, bathing in some large puddles which had formed on the path, In amongst them was a single Wheatear.

What a storming find and to top off a truly fascinating experience I located a distant Red Kite looking out across to Oxon.
Posted by boatbirder at 17:36