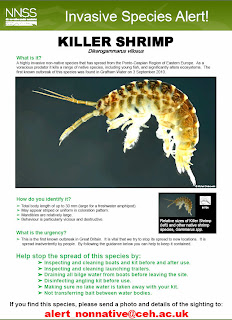 Dikerogammarus villosus is an invasive non-native shrimp that has spread from the Ponto-Caspian Region of Eastern Europe – it is native to the Black Sea and the Caspian Sea. It is believed to have invaded Western Europe via the Danube. It has spread across most of Western Europe over the last 10 years. It can grow to 30mm long in ideal conditions, much larger than our native freshwater shrimp.

Specimens being recovered from and observed in Grafham Water at present are between 10 and 15mm in size. It often has striped or spotted markings. Due to its voracious appetite, it is commonly known as ‘killer shrimp’.

Why is it a problem?

It has been found at Grafham Water, Cambridgeshire on 3rd September. This is a water supply reservoir popular for angling and watersports. Anglian Water and Environment Agency scientists are monitoring lakes and streams nearby to assess whether it has spread to other sites.

How did it get into the lake?

We don’t know. The shrimp is now widespread on the continent, and any boat, trailer or kayak that had not been sufficiently cleaned after use on mainland Europe may have introduced it. It is possible that it may have been transferred by a migrating bird.

What should the public do?

This shrimp is one of many invasive non-native animals and plants that we spread by our activities. Please ensure that you clean boats and watersports equipment after use. Take great care when moving plants and animals around the countryside.

What should a member of the public do if they come across what they believe to be a non-native shrimp?
Members of the public should carefully check the identification of the shrimp with details provided on www.nonnativespecies.org.uk. Images of suspected non-native shrimps can be sent to alert_nonnative@ceh.ac.uk for confirmation.
Posted by boatbirder at 20:33