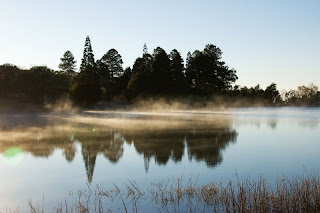 When I set off from the marina for Brandon Marsh this morning just before sunrise Orion was high up in the east with Sirius the 'dog star' rising just below, winter is on the way!

The local Little Owls were calling quite close by but I failed to get a glimpse and as I reached the carpark my eye was taken by a black figure which darted into the undergrowth. I'd like to think it was a local cat rather than a Mink, the latter would be a very unwelcome visitor as I've not seen one within the marina grounds for a long while.
Brandon was idyllic when I arrived, the mist was rising across the reed beds, but despite last nights reports of Little Stint on East Marsh Pool I decided it was too lovely a morning to go straight to the hides. As I passed by Sheepfield with Paul Norman for company several Linnet came overhead, followed shortly after by a lone Great Spotted Woodpecker. Why have Chiffchaffs suddenly begun calling one more? perhaps it's something in their hormones but I'd heard two on my trek around to New Hare Covert. On entering the covert a male Blackcap and juvenile Goldcrest were seen close to the only American Oak on the reserve.

We eventually arrived at Wright Hide and met up with Jeff Hood who pointed out a single Turnstone on one of the back Islands, reported on site yesterday by Steve Chapman, but no sign of any other small Waders. River Pool delivered 2 Kingfisher and a Reed Warbler and Teal Pool offered nothing more, so on to big hide for coffee. Over coffee 8 Snipe were present and around 10/12 Swallows came through, and I managed 1 House Martin in amongst them, a recently reported eclipse male Gargarney was also nowhere to be found.

My trip to Carlton Hide was a rather quick event with the hide completely full of photographers and resembling something like a typing pool, the clatter of automatic shutters just too much to take. "Apparently the Kingfishers were showing well".

A quick visit to Teal Hide on my return to Big Hide gave up a Green Sandpiper feeding quite close in, and on returning to Big Hide the highlight was a Hobby which flew low across the pool before departing over the Covert. Having seen some record shots of yesterday's possible Little Stints the general consensus is Dunlin, Stint would have been an excellent record but I'm afraid it's not to be.

As things began to warm up 6 Common Buzzard took to the thermals as we departed for a tour of Farm Field where despite the dampness a number of Butterfly were also on the wing. These included Small Heath, Small Copper, Speckled Wood, Small Tortoiseshell and Comma. There was also plenty of evidence today indicating some busy Badger activity, which included a couple of Badger Latrines, the location of which you can understand should remain anonymous!

Arriving back at the marina at around 12.30pm I was delighted to see a large flock of around 30+ Tree Sparrow, this included a good number of juvenile, more evidence of a good breeding season in our locality. Finally after checking my Brandon records I discovered that this mornings Turnstone was a Surprising First for me at Brandon Marsh having missed our earlier spring visitor.
Posted by boatbirder at 14:59