⛅️23C Monday 20th August 2018 ~ Before meeting up with the Brandon Marsh Volunteers, who were on an away-day at RSPB Frampton Marsh I decided to make an earlier start arriving at Gibraltar Point NNR just after 07:00hrs. 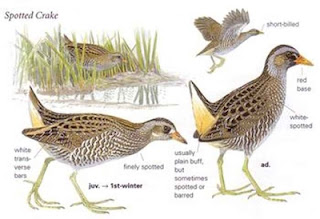 My main objective was the long staying Spotted Crake, which has been showing intermittently from the 'Mere Hide' for the past few weeks. From the parking area, it was just a short walk along to the hide and I was seated, surprisingly alone some fifteen minutes later.

There were several pretty vocal juvenile Little Grebes around the pool calling constantly to the parent and every so often groups of Swallows would drop down to drink and rest up a little. Two Sedge Warblers showed well for a while and a single Redshank was the only Wader to be found. Constantly scanning the reeds and the small exposed muddy area directly in the front of the hide the odd Moorhen would pass through and with no wind, the reeds would occasionally flick with activity, raising my expectations. It was just after 8am that I was rewarded with an albeit brief but unmistakable view of the Crake as it passed through a small channel in the reeds and then out of sight! Despite sticking around for another 90 minutes for better views the bird, unfortunately, didn't show again. However, a Marsh Harrier and Short-eared Owl passing through made the wait well worthwhile.

Before heading off a quick look across Jacksons Marsh produced eight of a reported fourteen Spoonbills, plus a near-summer plumage Grey Plover.

I eventually met up with the Brandon team at RSPB Frampton Marsh around 10:30hrs, enjoying a good days birding, although the reserve today was a lot quieter than of late. A few of the highlights included the long staying Pink-footed Goose and Whooper Swan, obviously both carrying injuries, Peregrine, three Spotted Redshanks, many Ruff and a couple of Stoats along the track from the '360' Hide.