⛅️💨 18C Friday 24th August 2018 ~ A second visit of the week to RSPB Frampton Marsh in Lincolnshire on Friday, mainly to catch up on a Stilt Sandpiper, which typically arrived on site a few days after my visit on Monday!

It was actually Theo de Clermont who persisted, I mean encouraged me to go so notwithstanding we were on the road by 06:00hrs, arriving at Frampton a few hours later. It was a much different day to Monday's heat and humidity, with a stiff north-westerly breeze and a temperature in the low teens.

It was quite an easy task to seek out the Stilt Sandpiper, just follow the path to the small groups of birders already on the bird. At this point it wasn't too close in, preferring to stay out in the centre of the reedbed scrape feeding frantically along with the many Black-tailed Godwits and Ruff, a Garganey drifting passed while observing. Unfortunately, a Red-necked Phalarope which was also on site was seen before our arrival but sadly not again during our stay. Thankfully we both have this particular species on our year-lists already😙

After a while, we moved around to the Reedbed Hide path, pausing on one of the newly created raised areas for viewing, along with a dozen others but it was no nearer. In the hope that the bird may come a little closer for photos later, we decided to head off on a tour of the reserve, taking in a very bracing walk along the sea wall. The best during our walk included Marsh Harrier, Pink-footed Goose, (2) Bar-tailed Godwit, (10) Spotted Redshank and (2) Wheatear. 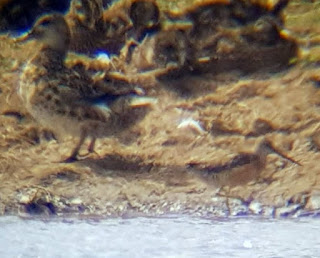 It was while we were back at our original spot observing the Sandpiper once more, which incidentally hadn't come any closer when news came through of a possible Long-billed Dowitcher on Marsh Farm Reservoir! Ten minutes later we were observing the now confirmed sighting, along with around 20/30 other birders. The bird remained feeding on the far bank while we observed for around 15 minutes before suddenly taking flight alongside a Common Sandpiper and disappearing out towards the saltmarsh and Wash. What an incredible piece of good fortune, with what I would imagine was less than fifty or so people getting the opportunity of seeing yet another North American vagrant to the east coast!

We finally had much better views of the Stilt Sandpiper before leaving around 14:00hrs after an excellent and memorable visit.