GIRDLE NESS ~ ABERDEEN HARBOUR
Just a 30-minute drive from home the harbour and headland of Aberdeen at Girdle Ness is fast becoming one of my favourite sites to visit.
Girdle Ness is the headland on the North Sea coast of Aberdeenshire and extends into the sea at Aberdeen, separating Aberdeen Bay from Nigg Bay to the south. The shipmaster of Aberdeen demanded a lighthouse be built at Girdle Ness when the whaling ship Oscar was wrecked there in 1813 with only two survivors out of a crew of 45. The lighthouse was eventually built in 1833, by Robert Stevenson. My walk, which begins at the local allotments takes in the scrubby embankment, rocks and shoreline below the harbour entrance and continues on as far as the lighthouse.
I arrived just on high-tide and there were five Rock Pipits foraging around the rocks as I made my way down to the shoreline below the allotments. In the large sycamore tree as you make your way down the slope seven Greenfinches and a solitary Redwing. Out in the harbour were several Seals and Guillemots, one of which was swimming pretty close in as I reached the first breakwater.


These large breakwaters often hold good numbers of Gulls but nothing visibly out of the ordinary today. There were around thirty or so Shag, a similar amount of Oystercatchers and a spectacular roost of over one hundred Purple Sandpipers. My second Black Redstart of the day suddenly landed nearby but didn't hang around and was gone in a flash! In among the Sandpipers, other roosting waders included Ringed Plover, Turnstone, Redshank and a couple of Knot before I headed over to the Battery.

Torry Battery - built to defend the harbour in 1860 - is one of the best spots for finding migrant birds and has an outstanding track record for rarer species along with the more commoner migrants and although late in the birding year you still get a sense that anything could turn up. Today was quiet but there were still a number of Blackbirds from the recent influx, Meadow Pipit and a couple of Redwing. 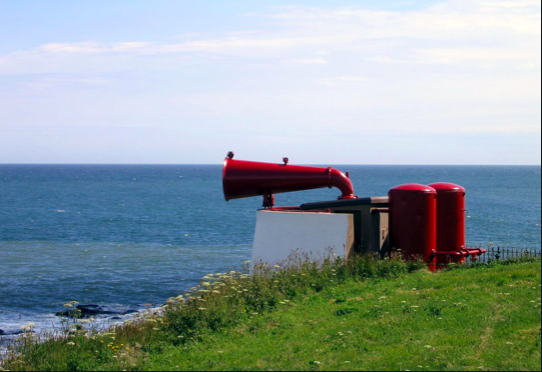 The foghorn opposite the lighthouse, currently the limit of my walk due to the new harbour extension, offers plenty of shelter for sea-watching in most conditions and today, although conditions were a little calm with south-westerlies, I spent an hour watching Common Bottlenosed Dolphins, Eiders, Seals and also noted were Kittiwake, Red-throated Diver, Guillemot and a selection of Gulls: Herring, Common, Great Black-back and Black-headed. The surprise of the visit, was when a Kingfisher suddenly flashed between the rocks below. Another addition to my 'new' Scottish birding list.
A Few More Images of the visit...