A blustery northerly and heavy rain overnight gave way to snow showers this morning. Thankfully by the time I reached RSPB Fowlsheugh just south of Stonehaven around mid-morning, the sun had broken through to produce a gorgeous crisp but somewhat 🥶chilly day.

Fowlsheugh is normally a summer destination and holds the second-largest seabird colony on the Scottish mainland. As such it has extensive cliffs and this, of course, means lots of seawatching opportunities. Naturally, at this time of year, the place is all but deserted with most of the summer inhabitants spending the winter out to sea. That said, in my current mode of visiting as many near local sites as possible to get a feel for Aberdeenshire I decided to take the 5km round trip across the clifftops.
The one thing I've become accustomed to when anywhere near cliffs or the rocky seashore is the sharp explosive 'ssiip' of the Rock Pipit. Today was no exception with at least eight birds noted by the time I'd completed my walk.
Apart from the Pipits and a few large skeins of Pink-footed Geese overhead the clifftop was as I'd mentioned earlier pretty quiet apart from a passing Oystercatcher, with most of the action taking place below on and around the water. These are high unprotected cliffs and if you're a little skittish with heights (like me) it can be quite daunting.
Thankfully there are a few small benches strategically placed around where you can perch safely for a while and just enjoy the views offshore. My first shortstop paid off when four Velvet Scoters flew through heading south, very distinctive with their white wing flashes. While here I was quick off the draw when a Peregrine, one of three sightings today passed closely overhead.
There were a few Redwings sheltering in the gorse as I continued my walk and below apart from the regular Gulls, the odd Kittiwake would pass by. No sign of any Dolphins today but the occasional Seal would surface in what seemed pretty turbulent waters. A few Red-throated Divers and what I thought could have been a Great Northern Diver. I think confirmed (unless anyone has any further comments ~ boatbirder@gmail.com) when I got home later by the photographs I'd managed to fire off. Rubbish quality but great for ID purposes! 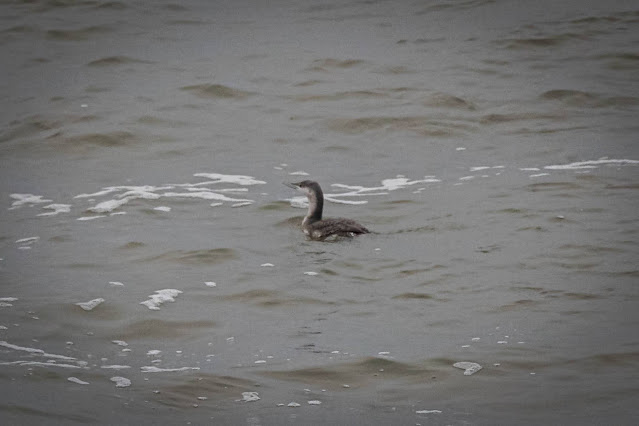 NEW Scottish Life-List Since Relocating in October 2020
Posted by boatbirder at 23:47