This weekend has been pretty dreich here but mild and calm and these conditions seem to have prompted a large fall of Blackbirds particularly overnight! While having breakfast with Dazza looking out across the Benachie hills every tall tree seemed to have a half dozen or so in each one. In fact, when I arrived at Nigg Bay in Aberdeen a short while later they were still literally falling from the sky.

However, I wasn't here for the Blackbirds I was here initially to see a Greater Short-toed Lark which had been reported while we were enjoying breakfast. I'm not a twitcher by nature but since arriving here in north-east Scotland I've discovered that you can move around these parts with absolute impunity and if the satnav says you'll arrive in 30-minutes then you'll arrive in 30-minutes!  And besides, if I connected with this particular bird it would be a British and of course Scottish 1st for me so it was worth the effort!
Actually, it was no effort at all thanks to the ABZ WhatsApp group directions and a few local birders who pointed me in the right direction when I arrived. 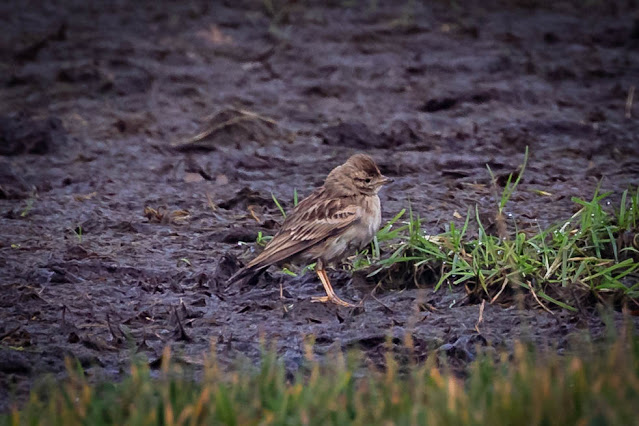 At first sight, the bird was obviously exhausted and at one point it seemed you could almost reach out and touch it. However, I'm glad to report that after an hour spent watching the bird, it was feeding well and indeed having the odd fly about and even calling on occasions so a successful first twitch all around!
This was my first visit to this side of the harbour and what struck me is that the whole area is just a wonder to explore. This despite being almost in the city centre and with a huge extension to the harbour currently underway. Away from the shoreline most of the headland here is golf course but it still holds lots of areas of cover and Nigg Bay itself has a series of marshy pools and wooded areas. At one stage I could hear a Water Rail calling and the wooded areas held Greenfinch,  Siskin and Goldcrest.

After Nigg Bay, I drove around to Aberdeen Harbour and took a walk passed the allotments and along the embankment up to the lighthouse. In the harbour entrance, the usual Seals and Guillemots were present, along with double-figure Shag, Cormorant and a selection of Gulls: Common, Great Black-backed and Herring. Just a few waders to be found Oystercatcher and Redshank, plus I'd counted six Rock Pipits by the time I arrived at The Battery.
Here I registered eighteen more Blackbirds, Song Thrush, female Blackcap and three Meadow Pipits. As the weather had now begun to deteriorate I had a quick sea-watch before heading home and among the many Eider, a group of four Common Scoter were a first for my new Scottish list.
Posted by boatbirder at 23:01