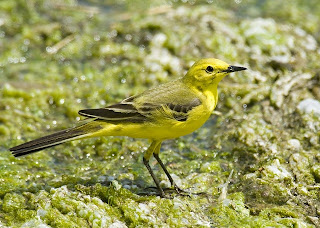 A brief update for Brandon today as the Work Party tasks took priority over birding. The main work was the clearing of Shotton's Gully of reed and debris, with the aim to provide a better flow, this is a natural stream which runs under the path from the Nature Centre through to Horstail Glade. We came across several Common Frogs & Toads during the work and released them unharmed further up stream.
Nothing unusual on arrival at 6.30am, although the possibility of the first Sedge Warbler of the year was always on the cards. Chiffchaff, Blackcap, Willow Warbler and Sand Martin are now well established on the reserve, a few Swallows and House Martins are also mingled in, plus there are now a good number of nesting species such as Long Tailed Tit, Treecreeper and Nuthatch.
A pair of Ringed Plover and a single Little Ringed were visible for most of the day on Willow Island along with Redshank and Oystercatcher.
After our debrief myself and Derek had a wonder down to the Main-Hide in the late afternoon and were fortunate to pick up 2 Yellow Wagtail on Willow Island, which only stayed for minutes before flying off to the East of the reserve, the first record for this year. Another surprise came when I had a quick look at Jeff's website before bed where a Cuckoo calling had been recorded, a remarkably early sighting!
Posted by boatbirder at 23:01