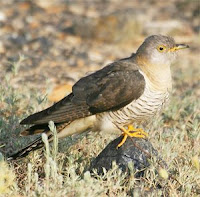 On arrival today I made the decision to head for the Wright Hide without delay, and what a decision, minutes after arriving the thunder and rain began with gusto!
I sat for a while just admiring the storm, I'm a great lover of storms, but immediately I turned to the birding I spotted my first Common Tern of the year perched on the south goal post, East Marsh Pool. After a further scan I located a single Ringed Plover and a couple of Little Ringed, the latter of which I watched mating later in the day. During the storm I counted a small flock of 25 Black Headed Gulls, which looked like dropping in but continued on their way.
After the storm passed I was left with a blustery N-Easterly, overcast and a temperature of around 8C, not bad considering the forecast was for the warmest day of the year!!
I took the decision to walk through to New Hare Covert and passing Newlands reedbed on my way picked up another year first, a Whitethroat singing happily from a bramble. Shortly after, yet another first of the year, as I heard my first Reed Warbler singing from within the Newlands reedbed. No sign unfortunately of a Wheatear, which was noted and photographed on the golf course yesterday.
My visit to Teal Hide and the Main Hide yielded Redshank, Oystercatcher, still sitting, and great views of a Sedge Warbler from the reedbed directly in front of the Main Hide, a Common Buzzard flew across N-Westerly shortly after. I met Jenny, a member of the Conservation Team, and her friend a little while later and decided to go for coffee in the Nature Centre. We took the route back through New Hare Covert and as we emerged to look across Sheepfield we heard the unmistakable call of a Cuckoo (pictured). Four firsts of the year today isn't a bad count at all, my visit lasted from 6.30am through until around midday.
Sub note :- House Martins, Swallows, Blackcaps and Willow Warblers are now plentiful on the reserve. I didn't do my usual count today so I'm unsure of my total species numbers!
Posted by boatbirder at 17:35