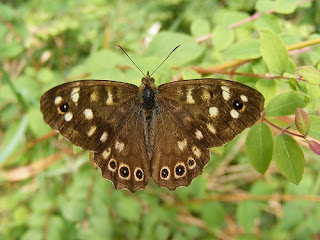 Back at Brandon this morning with Nightingales still reverberating in my ears from my Holland trip!
With clear blue skies and a temperature of 21C the chances of any migrating birds dropping in on route were slim. With such excellent conditions any migrants were more likely to continue on their merry way. It seems that over the weekend I did miss out on 2 Whimbrel on Willow Island and a passing Osprey on Sunday.
I met up with JR who was ringing once again and gave a hand for the rest of the morning but with no great success due to the sunny conditions.
Shortly after PB had joined us we did however pick up on a single Lesser Whitethroat on Newlands, our first for the year. A little while later we had a phone call with information on a late wintering Brambling that had been located in New Hare Covert and moving around to investigate it wasn't long before we picked up our second first for the year, high in the canopy. These two were the highlights for the day, even after a good stint in the Main-Hide and a thorough search of Farm Field for Wheatear and Chats. A couple of other reports of species picked up today by other birders were Bittern on Newlands and Lesser Spotted Woodpecker in New Hare Covert, plus PB did have Cuckoo before meeting up.
Another bonus today were good numbers of butterfly species which included the first Speckled Wood (pictured), plus Brimstone, Comma, Peacock and Orange Tip. I could really get more into butterflies if the damn things would just stay still long enough to identify, but I really do enjoy their company at Brandon!
A quick visit to Napton Reservior on my way home failed to locate anything of interest, not even a Warbler to be heard or a Gull or Tern to be seen!
Posted by boatbirder at 18:47