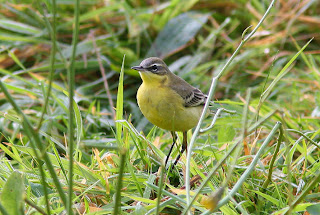 A thoroughly wet and dank Brandon produced a couple of surprises and brightened up what would have been a miserable work party day, referring to the weather of course!
My normal early walk with JR produced the usual species which now includes Whitethroat & Reed Warbler, our latest arrivals and just prior to meeting up I encountered a really attractive male Muntjac Deer on the New Hare Covert track. Once again JR made the comment " I've got a good feeling about today", a statement which usually produces nothing out of the ordinary and always brings a wry smile.
However, there are always exceptions and today was one of them. Arriving at the Wright Hide, where we were joined by PN, a quick scan located a single Wigeon, unusual on the reserve for this time of year, our now regular pair of Little Ringed Plover and the other normal Wildfowl and Wader suspects. Scanning Willow Island in more depth with my scope I immediately produced 3 Yellow Wagtail, one of which was the European Blue Headed version (similar to the one pictured), not seen on the reserve for some considerable time. As if that wasn't enough, what followed was even more of a surprise. While we were enjoying the Wagtail JR picked up a large brownish bird flying west across East Marsh Pool, this was immediately identified as a Bittern! If anyone would have told me that I would be seeing Bittern on the reserve in mid April I would have called them nuts, nevertheless a Bittern it was and a Bittern at any time is an absolute delight.
The only unfortunate thing regarding the Blue Head is that it's not recognised as a stand alone species and so I'm unable to add a tick to my year list, but a good one to pick up anyway and an excellent mornings birding.
Having now had time to digest and reflect on our sightings I'm still convinced that our wintering Bittern left a good time ago and that today's sighting was probably a migratory bird. That said, my heart would love to believe that somewhere on the reserve still hides a resident bird.
Posted by boatbirder at 16:34