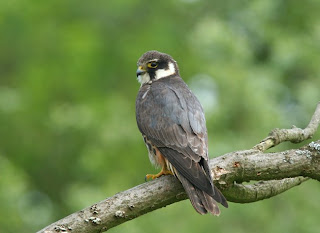 Ironic I suppose but my first bird of the day was a Yellowhammer singing from atop a Hawthorn as I made my way down the west path of the marina to my car. Ironic, because surprisingly Brandon has not had a single record of Yellowhammer for well over a year!

I completed a full day at the Marsh today and ended up with an excellent species count of 65, probably my best ever at the reserve. My first of the day was a Cuckoo calling from the Poplar over on Goose Pool, just prior to JR arriving, and my final species was a Hobby (pictured), which I observed from the Carlton Hide at around 4.15pm.

On our usual walk around to the Wright Hide we picked up a single Lesser Whitethroat near Sheepfield and located a Grasshopper Warbler on Newlands, surprisingly no Garden Warblers were heard, but I did pick one up later near the Carlton Hide. The East Marsh Pool had the usual selection but in addition today, a Wigeon, which was asleep on Willow Island, a solitary bird that seems to drop in from time to time. A Common Sandpiper was also present and we are almost certain that we have 2 pair of Little Ringed Plover, one of which may now be sitting.

While completing some maintenance issues on the reserve with the rest of the team we were lucky enough to catch site of a Tawny Owl and at one time, while having lunch in the main hide, a group of 5 Buzzard had located a thermal and were happily circling, getting ever higher and higher. As each day passes more and more young are being seen with numerous broods on show such as Mallard, Canada, Greylag and Coot.

I completed a walk of Farm Field in the hope of finding something different after the 'Tuesday' boys and girls had departed, but unfortunately the farmer had a nice fire going and had his tractor out, thus scuppering any chance I may have had!

Also of note today was a Muntjac Deer, which PB picked up on Newlands as we made our back to the Nature Centre. One of our regular visitors to the reserve also informed us that he had seen a Mink yesterday, most likely the same one I observed on Saturday and roughly around the same location, plus he observed a single Yellow Wagtail on Willow Island.

A full listing of today's observations can be found HERE
Posted by boatbirder at 17:25