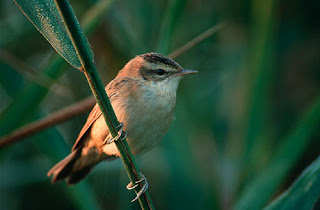 The dust had almost settled after yesterdays Avocet, the first in over 20 years at Brandon, which I unfortunately missed. However, meeting JR, our official Brandon recorder at around 6.15am, it became apparent that I wasn't the only person who missed the event, enough said and no more mention of the 'A' word!!
As the Marsh continues to flourish at a fantastic rate and now the first Bluebells are beginning to show, it wasn't long before I registered my first Sedge Warbler (pictured) of the year, singing from the Swallow Pool reedbed. As we listened across Newlands for Grasshopper Warbler we did pick up 3 Linnet flying north, but no luck on the Grasshopper, which was apparently heard reeling yesterday. No sign either by the end of my visit of the early Cuckoo, which was reported over Thursday late evening and Friday.
Just prior to entering the Wright Hide I was amazed to find a Water Rail, not discreetly feeding within the reedbed, but about 10ft up in a tree, an extraordinary site! East Marsh Pool gave us 2 Little Ringed Plover and a single Ringed Plover, as well as Redshank and Oystercatcher, the latter of which is now sitting. A pair of Pochard are also on site, unusual for this time of year.
While moving around to the Main-Hide we had good views of 5 Redpoll feeding in an Alder canopy, Blackcap and Willow Warbler were numerous and Chiffchaff appear to have completed their territorial battles and were singing less. Swallows are now arriving in numbers after a steady trickle, and we had 4 House Martins overhead at one time, Sand Martins are well established and are still visiting the artificial structure!
After another walk past Newlands, where a Whitethroat had apparently been heard earlier, and a final walk over at Farm Field, I ended the day with a total species count of 58, which incidentally didn't include a Whitethroat.
Posted by boatbirder at 17:34