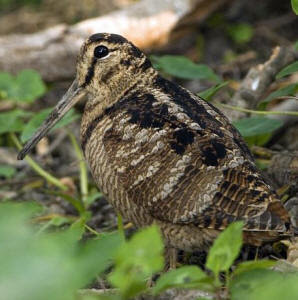 As predicted the weather took a definite turn this week with more autumnal westerlies blowing in and some welcome rainfall. That said my usual working visits to Brandon Marsh have produced some good and unexpected sightings.

On Tuesday 3rd we took the opportunity to re site one of the several Barn Owl boxes on the top reedbed. Myself and 3 other members of the team were moving through the 'Tip' area of the reserve and spooked a unsuspecting Woodcock (pictured) from it's daytime roost. This is only the second time I've encountered a Woodcock at Brandon since joining the team last December and both times I've almost stood on him before he took flight! I should also mention that I had more Common Darter and a single Migrant Hawker Dragonfly. Amazing in the present conditions!

On Wednesday evening I took the opportunity with other members of the Conservation Team to pay a late evening visit, in particular to catch a glimpse of the current Starling roost. Having strategically positioned ourselves in the Carlton Hide, overlooking the Newlands reedbed, we were delighted to see around 2000 Starlings come in and were further treated to some excellent aerobatics. The main event though was watching the 3 Sparrowhawks that came in for a late evening snack. Fortunately for the Starlings all 3 were unsuccessful in there numerous attempts to wheedle out a lone member of the roost. We were also treated to some good glimpses of Water Rail on East Marsh Pool.

This morning, Thursday 5th, I arrived slightly later than normal and after a phone call from a colleague missed a perched Barn Owl on the oak tree box. I thought my luck was really out when I had a second call informing me of a Whooper Swan dropping in on East Marsh Pool. With a quick spurt I once again arrived too late as our resident territorial Mutes had chased it off.
I needn't have worried however because as I rounded the corner from Newlands an adult male Whooper with 4 juveniles came in from the West. Although never quite managing a landing they did spend about 30 minutes circling the reserve and delivered some excellent low flying views. I should also point out that there is some question over whether the juveniles were in fact Mute Swans but more on this I'm sure in a later post!

NB - Also of note today was another sighting of a single Chiffchaff near Carlton Hide, (not Siberian as some have suggested) and a lone Greenshank still remains on River Pool. Further sightings of Bittern were also recorded over the weekend.